It is also a major addition to the portfolio of sports events in Singapore, which bills itself as an Asian events capital, alongside its Formula One grand prix and international golf tournaments. 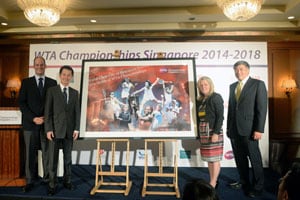 Singapore Wednesday won the right to host the showpiece WTA Championships from 2014 in a record five-year deal which looks set to give a huge boost to tennis in Asia.

The wealthy Southeast Asian city-state beat rival bids from China's Tianjin and Monterrey in Mexico for the season finale, which next year will boast a purse of $6.5 million, its largest ever.

The arrival of the tournament, the biggest in the Asia-Pacific region after the Australian Open Grand Slam, comes with Asian tennis still expanding on the back of Li Na's historic French Open win in 2011.

"This is the largest and most significant WTA Championships partnership in our history," Stacey Allaster, chairwoman and CEO of the Women's Tennis Association (WTA), told a packed press conference. "It's a record-breaker."

It is also a major addition to the portfolio of sports events in Singapore, which bills itself as an Asian events capital, alongside its Formula One grand prix and international golf tournaments.

Including the WTA Championships, next year the women's tour will hold a record 23 events in the Asia-Pacific zone, marking the first time the region will have hosted more tournaments than any other part of the world.

The push is partly due to China's Li, who became Asia's first Grand Slam winner in 2011 and reached her second Australian Open final this year, gaining such a profile that she appeared on Time magazine's cover last month.

Allaster said the impact of Li's win was only just being felt and would continue to reverberate for years as more Asian women players come to prominence.

"If we look 10 years down the road we will see the impact of Li Na winning the first Grand Slam for Asia-Pacific, where there will be so many young players in this territory saying 'If Li Na can do it, I can do it'," she said.

"So I think we will see more Asian players in the next decade."

The championships will be held at the 7,500-seat Singapore Indoor Stadium, part of a $1 billion sports hub currently being built on the outskirts of the city centre which will feature a 55,000-capacity main venue.

Hours ahead of the announcement, the WTA had inadvertently revealed Singapore as the new host by tweeting a picture of Allaster standing at an immigration desk in the country.

"Stacey has landed at our 2014+ #WTAChamps host city! Where is she?" said the tweet, showing Allaster with an immigration officer in Singaporean uniform.