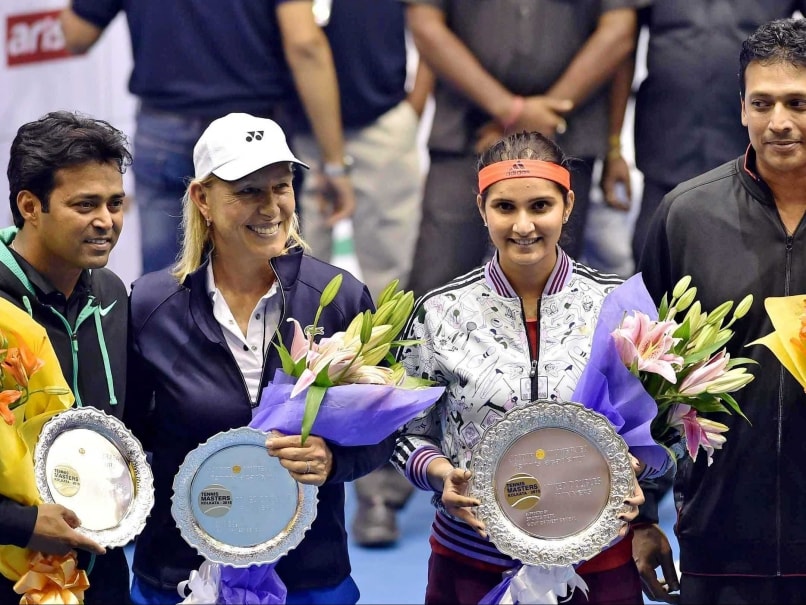 Legendary Martina Navratilova showed glimpses of her past with her super-fit partner Leander Paes but it was the duo of Sania Mirza and Mahesh Bhupathi who prevailed 7-5, 7-5 to win the Kolkata leg of the Tennis Masters as a prelude to the IPTL in Kolkata. (Read More in Tennis)

Paes and Martina squandered a 0-3 lead to go down the first set after Bhupathi and Mirza broke back by winning fifth, seventh and 11th games.

In the second set, both teams broke each other as they were locked 2-2 as Paes, Martina took a 4-2 lead before Bhupathi and Mirza bounced back to make it 4-4 by breaking the seventh game and went on to wrap the issue in 37 minutes at the Netaji Indoor Stadium.

"I think doubles is more fun than singles because here you can talk to somebody in the middle of the match but if you talk to yourself in singles people will think whether you're mad! Hope I keep on improving... I can still improve," Navratilova told the audience as they trail 0-1 in the three-leg promotional tour which will travel to Hyderabad and New Delhi in the next two days for the next two matches.

Paes, who is now based in Mumbai, was emotional to back in his home town and among his father (Dr Vece Paes), mother (Jennifer), sister and former coaches and friends.

"Today I drove through my school (La Martinere for Boys), my courts (South Club), my old house it was really emotional moment. It's very special and it's great to play in front of my people here... Looking forward to the next two days. Tennis is a way of life. A big 'Dhonyabad' to Kolkata."

Playing in front of a thousand-odd crowd who made up for their presence with some loud cheers to both the teams, Paes and Navratilova defied their age producing some spectacular display of shots to race to a 3-0 lead.

"Take a bow, take a bow," said the 42-year Paes to her 59-year-old legendary 18 Grand Slam singles winner with chants of 'Martina', 'Martina' from the stands.

"Thank you to the crowd for coming out in large numbers. I am coming here after nine years. It's great to play in front of you. Kolkata we will be back," Sania said.

But before it could seem a cakewalk for them, there was some serious action in store as the world number one women's doubles player Sania along with her former partner Bhupathi bounced back breaking fifth and seventh games to take a 4-3 lead and made it 5-3 with Bhupathi holding his serve.

Martina was not there to give up easily as they held their serve in the ninth game before breaking Bhupathi-Mirza to make it 5-5 for some pulsating action.

However Mirza and Bhupathi won the next two games easily as legend who flown into the city from Miami late last night showed some tiredness to wrap the first set 7-5.

Comments
Topics mentioned in this article
Sania Mirza Mahesh Bhupathi Leander Paes Tennis
Get the latest updates on Fifa Worldcup 2022 and check out  Fifa World Cup Schedule, Stats and Live Cricket Score. Like us on Facebook or follow us on Twitter for more sports updates. You can also download the NDTV Cricket app for Android or iOS.