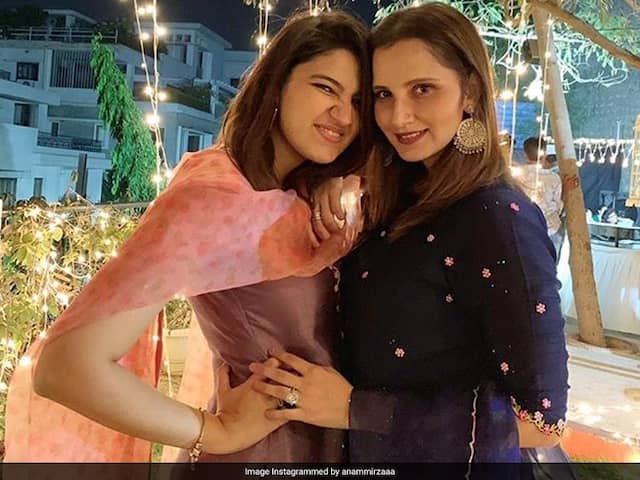 Sania Mirza confirmed that her sister, fashion stylist, Anam Mirza is set to marry Asad, the son of former Indian cricket team captain Mohammad Azharuddin, in December 2019. It brought an end to all the speculation and rumours doing rounds on internet in recent past. "She is actually getting married in December. We just came back from her bachelorette trip in Paris. We are really excited," India's tennis star Sania Mirza told The Times Of India on Monday.

"She is marrying a lovely boy. His name is Asad and he happens to be the son of Mohammad Azharuddin and we are really excited about it," Sania Mirza added.

In September, Anam had shared a picture on Instagram wearing a "bride-to-be" sash, with pink "bride-to-be" balloons decorating a glass window in the background.

The photograph, which now Sania has confirmed that would have been from her bachelorette, had created a storm on social media.

The comments section of the post was flooded with congratulatory messages from fans, with many quick to guess that Anam must be celebrating her bachelorette party in Paris.

Anam and Asad, also known as Mohammad Asaduddin, have been reportedly dating as the couple often shared pictures with each other on social media.

A close friend of Sania, filmmaker Farah Khan had also referred to Anam as the bride-to-be in one of her Instagram posts.

"Pillow talk!! Whn the mirza sisters r in town a girls night IN is a must.. bride to be @anammirzaa n @mirzasaniar" Farah had captioned the photograph with Sania and Anam.

Pillow talk!! Whn the mirza sisters r in town a girls night IN is a must.. bride to be @anammirzaa n @mirzasaniar pic credit:- @asad_ab18

Comments
Topics mentioned in this article
Sania Mirza Tennis Mohammad Azharuddin Cricket
Get the latest Cricket news, check out the India cricket schedule, Cricket live score . Like us on Facebook or follow us on Twitter for more sports updates. You can also download the NDTV Cricket app for Android or iOS.