Roger Federer is in fine form having clinched the Australian Open and Indian Wells so far this year and extended his record to 14-1. 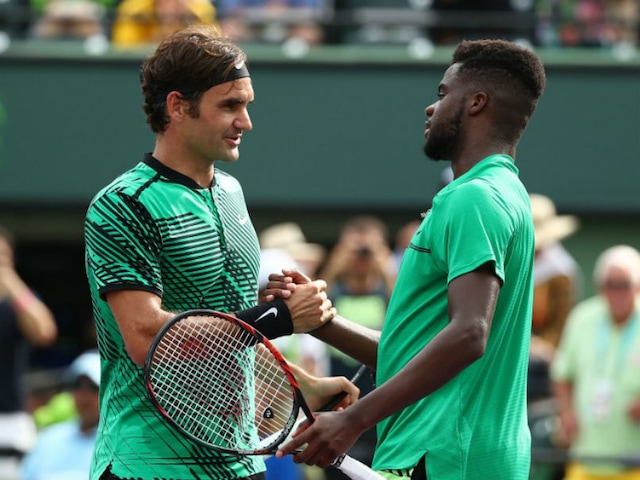 Roger Federer is looking for his third Miami Open title following wins in 2005 and 2006.© AFP

Roger Federer survived a brave challenge from American qualifier Frances Tiafoe before emerging with a 7-6 (7/2), 6-3 victory as he got his Miami Open title bid underway on Saturday. Tiafoe, ranked 101st in the world, struggled against Federer's serve but was strong on his own and forced a first set tie-break in which the Swiss came out on top. Reigning US Open champion Stan Wawrinka got off to a solid start, beating Argentina's Horacio Zeballos 6-3, 6-4 at Crandon Park on Saturday.

The 19-year-old son of immigrants from Sierra Leone then broke Federer's serve in the first game of the second set only for the 18-times Grand Slam winner to break back twice and run out a comfortable winner in the end.

Federer was full of praise for his opponent and said he would have gained valuable experience from the contest.

Federer is in fine form having clinched the Australian Open and Indian Wells so far this year and extended his record to 14-1.

Federer should have met Del Potro in Miami last year but the Swiss had to pull out with an illness and he says he is looking forward to renewing his rivalry with the South American.

"We've had some epic matches against each other: Semis at the French, Olympic semis, finals at the US Open. You name it, we've had some really good ones," he said.

In the absence of Andy Murray and Novak Djokovic, the top two ranked players in the world, Wawrinka is the number one seed and is fired up after reaching the final at Indian Wells last week, where he was beaten by Federer.

"I'm playing better tennis. I feel that I'm playing good here. I took the confidence from Indian Wells. So let's see... When I'm playing well, when I am confident with my game, I know I can beat anybody," said Wawrinka, who turns 32 on Tuesday.

"It has been quite tough conditions these last few days here. Raining, really windy today. It's really windy on the court, so it's never easy.

"I'm happy the way I was moving, the way I was playing, and my attitude in general was really positive," added Wawrinka, who next faces Tunisia's Malek Jaziri, a 6-3, 4-6, 6-3 winner over Spain's Feliciano Lopez.

Wawrinka will face either Malek Jaziri next after the Tunisian beat Feliciano Lopez 6-3, 4-6, 6-3.

Comments
Topics mentioned in this article
Roger Federer Juan Martin del Potro Stanislas Wawrinka Tennis
Get the latest Cricket news, check out the India cricket schedule, Cricket live score . Like us on Facebook or follow us on Twitter for more sports updates. You can also download the NDTV Cricket app for Android or iOS.