Roger Federer made a winning return from a six-week break, beating Potito Starace of Italy 7-6 (3), 6-4 in the first round of his hometown Swiss Indoors event on Monday. 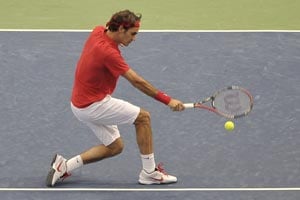 Roger Federer made a winning return from a six-week break, beating Potito Starace of Italy 7-6 (3), 6-4 in the first round of his hometown Swiss Indoors event on Monday.

The fourth-ranked Federer took time to find the rhythm in his ground strokes, and saved a break point at 5-all before winning the first-set tiebreaker.

The 30-year-old Swiss then broke the 54th-ranked Starace's serve in the opening game of the second.

Federer last played on September 18 in a Davis Cup match on grass in Australia where he beat Bernard Tomic in four sets.

After opting to rest and recharge, Federer played his first match ranked outside the top three since winning the 2003 Wimbledon title as the No. 5.

Federer came in with a 5-0 career record against Starace, but was unable to put pressure on the Italian right-hander's serve in the first set.

Starace created the only break point in the set which Federer saved with a forehand winner.

Federer converted his first set point in the tiebreaker by hitting a forehand winner down the line.

Leading 5-3 in the second, Federer earned a first match point with an overhead backhand volley winner, but then netted a service return.

He clinched the match in the next game with a service winner.

Federer is seeded third behind top-ranked Novak Djokovic of Serbia and Andy Murray of Britain, who is coming off three straight tournament victories in Asia.

Djokovic opens Tuesday against Xavier Malisse of Belgium, and Murray plays Robin Haase of the Netherlands on Wednesday.

Mikhail Kukushkin of Kazakhstan used his reprieve as a lucky loser in qualifying to beat Donald Young of the United States, 6-4, 6-2.

The 113rd-ranked Kukushkin entered the main draw after 30th-ranked Jurgen Melzer of Austria pulled out due to a season-ending back injury.

Comments
Topics mentioned in this article
Tennis Albert Montanes Roger Federer Potito Starace David Ferrer Novak Djokovic Bernard Tomic Stanislas Wawrinka Rafael Nadal Andy Murray
Get the latest updates on IPL 2020, check out the IPL Schedule for 2020 and Indian Premier League (IPL) Cricket live score . Like us on Facebook or follow us on Twitter for more sports updates. You can also download the NDTV Cricket app for Android or iOS.