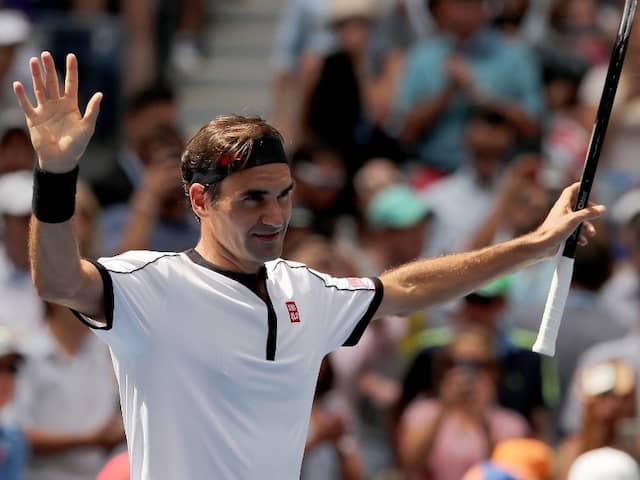 Roger Federer advanced to the US Open quarterfinals for the 13th time in his past 15 attempts.© AFP

"It was great. I thought I had a good feeling out here," Federer said. "David didn't have his best day either, he was struggling."

Federer, who improved to 9-1 in his career rivalry with Goffin, is 7-0 lifetime against Dimitrov, who dispatched Australia's 38th-ranked Alex de Minaur 7-5, 6-3, 6-4, to reach his first US Open quarter-final.

"Feeling excited first to be in US Open quarter-finals for the first time. This is what I practiced for, to play those matches," Dimitrov said.

"I already started thinking about the (Federer match). Going to really sit down for a couple hours and reassess how I've been doing this week."

Five-time US Open champion Federer's Open era Slam quarter-finals record grew to 56 and he matched Andre Agassi's second-best US Open total of 13 quarter-finals -- second only to 17 by Jimmy Connors -- in a dominant performance at Arthur Ashe Stadium.

"As soon as you get there, first match on Ashe against him, you can feel all the 20,000 people are behind him as soon as he hit the ball," Goffin said.

"All of a sudden every shot is 10 times tougher than usually. All of a sudden what you felt the day before during practice or the last matches, it feels completely different."

Goffin broke in the third game of the match and Federer responded by winning the next five games to seize the opening set in 26 minutes, 11 of the next 13 to grab command of the affair inside of an hour, and 17 of the final 19 in stunningly rapid fashion.

"He was great but I gave him the whole match," Goffin said. "It's tough to say but yeah, probably my worst match against him I've played."

Federer fought back after being broken and never stopped.

"I was down in the score earlier," Federer said. "Obviously you have to come back. I was too down on myself.

"In a way I feel bad about beating up on a friend like David. I hope he has a better end of the year."

Dimitrov back in form

Dimitrov faced only one break point in dispatching the 20-year-old Aussie.

"I was able to neutralize everything that was thrown at me. Played right at the important moments and that was that," he said. "Played really well when I had to and had great composure throughout the match."

Dimitrov struggled with a shoulder injury early this season but is finally back on form.

"I'm pleased to be back on a court pain free, feeling pretty good," he said. I'm just really happy right now. One of first most exciting and important things is to just enjoy after getting back onto the court."

Djokovic, a 16-time Grand Slam champion who has captured four of the past five Slam crowns, is 19-5 against Wawrinka but they have not played since the Swiss defeated Djokovic in the 2016 US Open final.

Also playing later is Russian fifth seed Daniil Medvedev, who won at Cincinnati in the last major US Open tuneup event. Medvedev was fined $9,000 for an obscene gesture and unsportsmanlike conduct in a third-round victory, his third fine in three matches at Flushing Meadows.

Spain's second-ranked Rafael Nadal, an 18-time Grand Slam winner who has never faced Federer at the US Open, returns to the court on Monday seeking a last-eight berth on the other side of the draw against 2014 US Open champion Marin Cilic.

David Goffin Grigor Dimitrov Tennis
Get the latest Cricket news, check out the India cricket schedule, Cricket live score . Like us on Facebook or follow us on Twitter for more sports updates. You can also download the NDTV Cricket app for Android or iOS.