The two-time Wimbledon champion will face Djokovic, a three-time winner at the All England Club, for a place in Sunday's final. Djokovic leads their epic head-to-head rivalry 26-25. 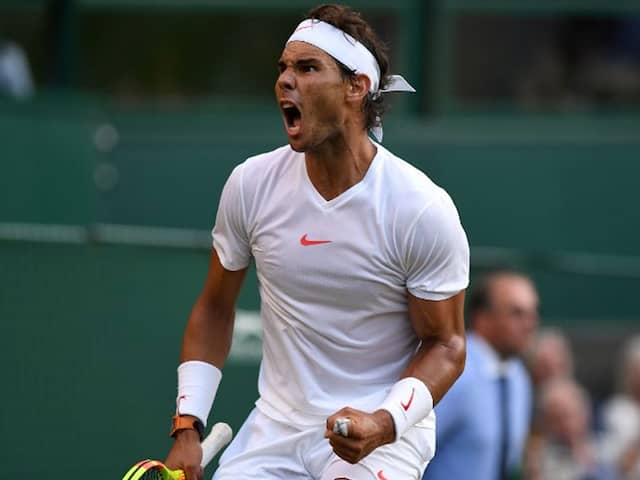 World number one Rafael Nadal set-up a mouthwatering Wimbledon semi-final against old rival Novak Djokovic after battling back to beat Juan Martin del Potro in a Centre Court thriller on Wednesday. Nadal triumphed 7-5, 6-7 (7/9), 4-6, 6-4, 6-4 after four hours and 48 minutes to reach his sixth Wimbledon semi-final and 28th at the majors. The two-time Wimbledon champion will face Djokovic, a three-time winner at the All England Club, for a place in Sunday's final. Djokovic leads their epic head-to-head rivalry 26-25. Victory on Wednesday gave Nadal his 11th win in 16 meetings against the fifth seed Del Potro as the Spaniard stayed on course for an 18th Grand Slam title.

That ambition came a little closer after defending champion Roger Federer was knocked out by Kevin Anderson earlier in the day.

"I think it was great quality tennis and in the final set there were some amazing points," said 2008 and 2010 champion Nadal.

"Sorry to Juan Martin, he's an amazing opponent and player. In some ways he deserves to win as well.

"Anything could have happened, so this is a big achievement for me to get to the semi-finals at Wimbledon.

"In the last set there was a little of everything, great points, great rallies, he was hitting crazy with his forehands. I tried to resist and maintain focus.

"Now is the moment to enjoy and then start to recover as it was a tough physical battle.

"(Djokovic) is one of the toughest opponents. I am just excited to be in the semis."

Nadal carved out the crucial break in the opening set for a 6-5 lead and claimed the opener off a Del Potro backhand error.

The world number one, playing in his first All England Club quarter-final since finishing runner-up to Djokovic in 2011, then wasted four set points in the second.

One of those was on double fault in the tiebreak and the giant Argentine pounced to level the tie.

Former US Open champion Del Potro then stunned the Spaniard with the only break of the third set in the 10th game, secured with a deep forehand.

But back came Nadal to level the tie before an enthralling final set which was punctuated by great shot-making and spectacular dives and falls by both players.

Nadal broke for 3-2 but had to save break points in the sixth and eighth games before securing a memorable victory.

A weary Del Potro, a semi-finalist in 2013, finished with 33 aces and 77 winners but even those impressive statistics were not enough.

Novak Djokovic Roger Federer Juan Martin del Potro Tennis
Get the latest Cricket news, check out the India cricket schedule, Cricket live score . Like us on Facebook or follow us on Twitter for more sports updates. You can also download the NDTV Cricket app for Android or iOS.