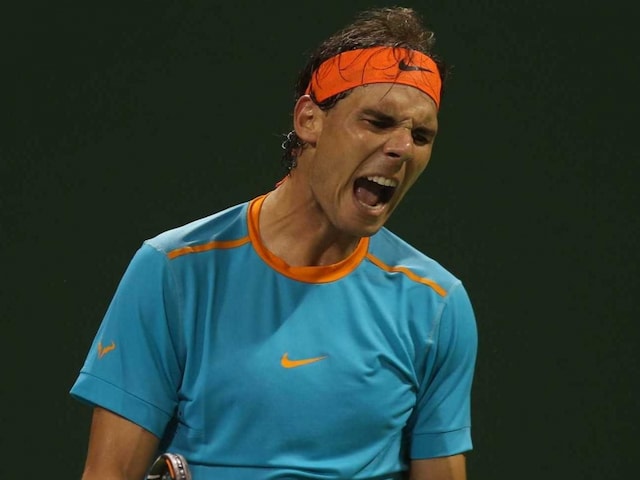 Rafael Nadal reacts during his match against Michael Berrer at Doha.© AFP
Doha:

Rafael Nadal's ability to make a quick recovery from multiple ailments was thrown into doubt Tuesday as he lost 1-6, 6-3, 6-4 to Michael Berrer in Qatar.

This first round match was Nadal's first of the 2015 ATP World Tour and he appeared to have had insufficient time to recover from an appendectomy, and far too little match practice over the last two months.

Nevertheless, it was a humiliating outcome for one of the most successful players of all time, who had won the first set at a canter before his game crumbled.

Berrer is a 34-year-old qualifier ranked outside the top 100 who is playing the last season of his career.

Nadal has also been suffering from back and wrist injuries, which reduced his service speed greatly.

And he appeared to cast doubt on his ability to take part, let alone be a contender at the Australian Open, which begins in less than two weeks.

"Little things didn't quite work out for me today," he said. "This is the third comeback of my career after injury, so we will see how it goes in a couple of months. I wanted to start well, but it was not the case today.

"I also want to play in the Australian Open which is a tournament I like a lot. I don't know if that will be the case either, but I am going to work for it. If not I will be playing at Rio and Buenos Aires.

"The season is long. After coming back from injury you can't see the immediate moment, you have to look further ahead a little bit.

"Now in my mind I have to practise well and try to be ready for Australia, but I know it can happen that I will go there and lose. Perhaps I will win a couple of matches there, I don't know."

Berrer had only taken four games in four sets off Nadal in their previous two meetings, but recognised a career-greatest opportunity and in patches responded by raising his standards to new heights. He was also admirably frank in his assessment.

"It's one of the matches which will stay in my memory for ever, but let's be honest it was the first match for Rafa after injury," he said.

"In the first set it felt like the other matches against him," he added. "Then it became easy to attack because it was the only chance I had.

"It's also my last season and I had nothing to lose, and I'm enjoying it here -- so why not?"

Berrer broke early in the final set and led 3-1, sometimes finding angles which perhaps only a fellow lefty could manage against Nadal.

The French Open champion almost broke back immediately, but a Hawkeye decision showed his ground stroke to have landed a millimetre beyond the baseline, and his only real chance after that came in the final game.

That saw Berrer slip to 15-40, only to produce two good first serves, and then go break back point down by delivering a double fault, before attacking the net on each of the last three points and finding Nadal unable to come up with any of those rasping passing shots for which he has become so renowned.

Earlier Novak Djokovic, who succeeded Nadal as world number one in June, made a satisfactory start with a 6-1, 6-4 win over his Serbian compatriot Dusan Lajovic.

"I didn't know during the last couple of days whether I would be able to play," Djokovic said, referring to the fever he has had. "So in the circumstances it was a very good start."

Two seeds went out -- Philipp Kohlschreiber, the number five from Germany, beaten in three sets by his 58th-ranked compatriot, Jan-Lennart Struff, and Leonardo Mayer, the number eight from Argentina, who was beaten 5-7, 7-6(7-4), 7-6(7-4) by Andreas Seppi, the world number 45 from Italy.

Comments
Topics mentioned in this article
Rafael Nadal Michael Berrer Tennis
Get the latest Cricket news, check out the India cricket schedule, Cricket live score . Like us on Facebook or follow us on Twitter for more sports updates. You can also download the NDTV Cricket app for Android or iOS.