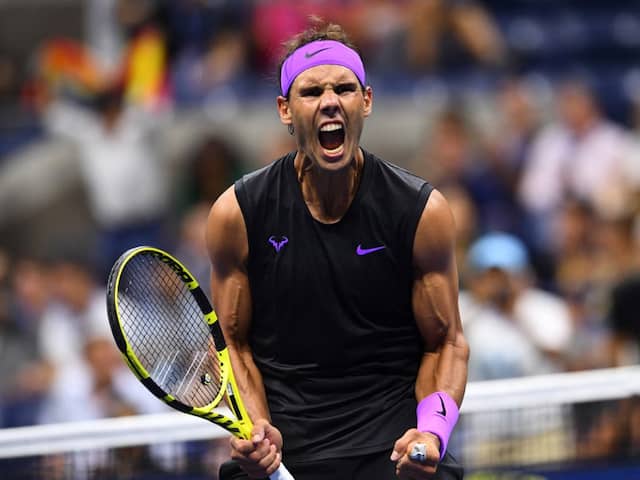 Rafael Nadal played down concerns over his left forearm as he received treatment early in the third set.© AFP

Rafael Nadal will play Italy's Matteo Berrettini in the US Open semi-finals after the 18-time Grand Slam champion defeated Argentine 20th seed Diego Schwartzman 6-4, 7-5, 6-2. Second seed Nadal -- a winner at Flushing Meadows in 2010, 2013 and 2017 -- beat a spirited Schwartzman for the eighth time in as many meetings in a nearly three-hour match that finished early Thursday morning. Schwartzman put up firm resistance against Nadal and twice fought back from double-break deficits in the first two sets, but the Spaniard found another gear at crucial moments to secure an eighth semi-final berth in New York.

"Straight sets but big challenges especially after the first two sets, having 4-0 and 5-1 and losing both breaks in a row, but I know how good he is when he's confident," Nadal said.

"I'm so happy how I accepted the situation and challenge and kept going, point after point. Here I am in the semi-finals. I'm super happy, it means everything."

Nadal, who was forced to retire during last year's semi-final against Juan Martin del Potro, played down concerns over his left forearm as he received treatment early in the third set.

"Physically I am fine. Today was a very heavy day, big humidity out there. I'm this kind of player who sweats a little, but sometimes under these conditions it's tough," he said.

Nadal is the only former major champion left in the men's field following the elimination of Roger Federer and Novak Djokovic, leaving him as the clear frontrunner in his pursuit of a 19th major title.

Schwartzman, who stands a mere 5ft 7in (1.70m), was bidding to become the shortest Grand Slam semi-finalist since 5-foot-6 Harold Solomon at Roland Garros in 1980.

"He's like a lion in the middle of the jungle. He's a fighter," Schwartzman said of Nadal.

Berrettini, the 24th seed, became the first Italian man to reach the US Open semi-finals in 42 years.

"What a great fight. I think it was one of the best matches I maybe ever saw -- I was playing but I also saw. I'm really happy I don't know what to say," Berrettini said.

The first-time Slam quarter-finalist blew a 5-2 lead in the final set and four match points before finally seeing off Monfils in a thriller at Arthur Ashe Stadium.

"I was lucky I had match points and he didn't have it -- it's better when you have them. I'm really proud of myself, I was always focusing on the next point."

A nervous Berrettini doubled-faulted on his first match point at 5-3 before a resolute Monfils fought off two more on his serve to send the deciding set into a tie-break.

Monfils coughed up a costly pair of double faults in the breaker -- and 17 in total -- as Berrettini surged 5-2 ahead, the Frenchman rescuing a fourth match point before a booming serve from the Italian clinched a memorable win.

"Right now I don't remember any points, just the match point. I remember also my double fault I must be honest," Berrettini said.

"I know how to bounce back, I've had some tough ones here before," said Monfils, who was beaten by Roger Federer in the 2014 quarter-finals after holding two match points.

"It was tough, I was just competing as much as I could but there was a big lack of serve today."

"I'm going to take the positive from these two weeks," he added.