Next for Rafael Nadal, who had a first-round bye, is a third-round matchup with 24th-ranked countryman Albert Ramos-Vinolas. 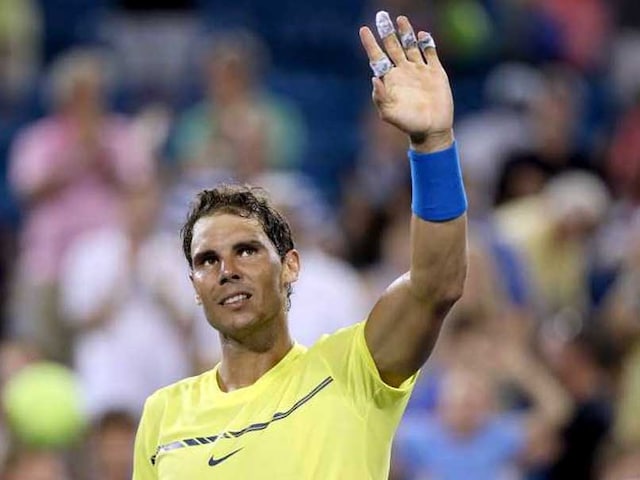 Rafael Nadal cruised to victory in his first match since clinching a return to world number one while Alexander Zverev's 10-match win streak was halted Wednesday at the WTA and ATP Cincinnati Masters. Nadal, a 15-time Grand Slam champion who captured his 10th French Open crown in June, defeated Richard Gasquet 6-3, 6-4, improving to 15-0 in ATP matches against the Frenchman. The 31-year-old Spaniard, who hasn't lost a set to Gasquet in 10 consecutive meetings since Toronto in 2008, said the victory was crucial after last week's second-round Montreal exit.

"It was important to win the first match after what happened last week in Montreal," Nadal said. "I'm happy with the way I played."

Nadal was assured overtaking Britain's injured Andy Murray atop the rankings next week when Roger Federer withdrew Monday from Cincinnati with a back injury. He has not topped the rankings since July 2014.

"It was an important goal of mine to come back to that number with all the things that have happened to me since then," Nadal said. "It's something very important and very difficult. I worked very hard for it. For sure that's going to be an emotional moment for me."

Next for Nadal, who had a first-round bye, is a third-round matchup with 24th-ranked countryman Albert Ramos-Vinolas. Nadal has won their three prior meetings, most recently in April's Monte Carlo final.

Zverev, coming off titles in Montreal and Washington and seeking his sixth of the year, admitted exhaustion was a factor in his 4-6, 6-3, 6-4 loss to US teen wildcard Frances Tiafoe, saying the toll of his extraordinary run caught up with him.

"I'm completely dead right now," Zverev said. "I've been dead for the past two days. I finished the match. I could have easily pulled the plug in the second set."

For 19-year-old Tiafoe, a second-round loser to the 20-year-old German this year at Wimbledon and the Australian Open, it was his greatest triumph, his first over a top-10 opponent.

"In the middle of the second set, I was about 10 percent," Zverev said.

"I couldn't believe it. I was so happy," Tiafoe said. "I played a pretty good match. These are ones that change a career."

On the women's side, top-ranked Czech defending champion Karolina Pliskova defeated Russian lucky loser Natalia Vikhlyantseva 6-2, 6-3, dropping Dane Caroline Wozniacki from the list of rivals who can overtake her for world number one this week.

Germany's third-ranked Angelique Kerber, who lost the top ranking after Wimbledon, lost her chance to reclaim it by falling to Russia's Ekaterina Makarova 6-4, 1-6, 7-6 (13/11).

Makarova struggled with leg cramps before winning on her eighth match point chance, improving to 5-0 this year against top-5 foes. She faces US wildcard Sloane Stephens next.

Seven-time Grand Slam champion Williams, this year's Wimbledon and Australian Open runner-up, will rest before the US Open.

"I'm going to take a break and have a rest and just go be," Williams said. "I'm just planning on being super rested."

Comments
Topics mentioned in this article
Rafael Nadal Alexander Zverev Richard Gasquet Tennis
Get the latest Cricket news, check out the India cricket schedule, Cricket live score . Like us on Facebook or follow us on Twitter for more sports updates. You can also download the NDTV Cricket app for Android or iOS.