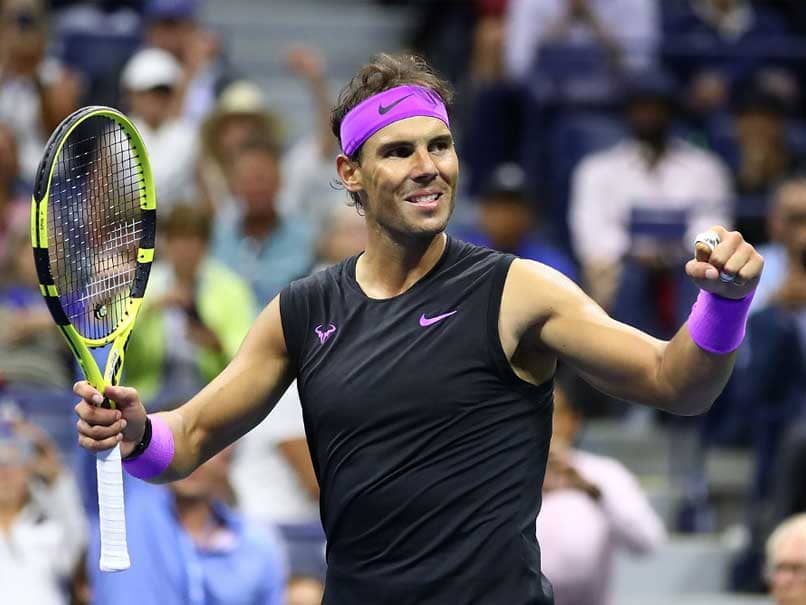 Rafael Nadal will face Daniil Medvedev on Sunday in the final of US Open.© AFP

Rafael Nadal looks to cap one of his greatest Grand Slam years with his fourth US Open title when he faces Russia's Daniil Medvedev in Sunday's final at Arthur Ashe Stadium. The 33-year-old Spanish left-hander chases his 19th career Grand Slam singles title, one shy of Roger Federer's all-time men's record, in his 27th Slam final and his fifth championship match on the New York hardcourts. "Very happy for everything. Another final of the Grand Slam and another final here in Flushing Meadows means a lot to me," Nadal said.

Nadal, who made the semi-finals at all four Slams for the first season since 2008, captured his 12th French Open title in June, lost the Australian Open final to Novak Djokovic and fell to Federer in the Wimbledon semi-finals.

And while he has dropped only one set in the Flushing Meadows fortnight, Nadal is facing the hottest player on tour in fifth-ranked Medvedev, who at 23 could become the first Slam winner born in the 1990s.

Medvedev has produced a stunning six weeks on hardcourts: reaching the Washington final, losing the Montreal final to Nadal in their only prior meeting, winning the title at Cincinnati while Nadal rested and now charging into his first Grand Slam final.

"Is a super tough final. I need to be playing at my best," Nadal said. "I think at the end of the (semi-final) match I increased my level again. I need to hold this level if I want to have chances on Sunday. If not, is so difficult. He is very, very solid."

Medvedev leads the ATP in season wins and has battled through four four-set wins at the US Open.

"Talking about Rafa, it's tough to find words," Medvedev said. "He's one of the greatest champions in the history of our sport. He's just a machine, a beast on the court.

"The energy he's showing is just amazing. To play him in your first Grand Slam final should be, I want to say, a funny thing. It's not going to be a funny thing, but it's going to be an amazing thing to live."

Hearing of Medvedev's praise, Nadal responded: "Always is beautiful to hear nice things from your colleagues. Happy for that. Just I hope to be like this on Sunday. I will need it."

Nadal will be Medvedev's fourth left-handed foe of the tournament.

"It's really unusual. I think this year before I've played like three lefties in all the year," Medvedev said. "Now I've played already three this tournament. Just amazing. But of course it helps a lot that I played three lefties before with completely different style. Kind of getting used to it. It's going to help me."

Medvedev also sees an edge in having faced Nadal in Canada, even in defeat.

"It was a tough one," Medvedev said. "His energy was much higher than mine. He kind of, I would say, eaten me on the court.

"He was only going harder, harder, faster, stronger, and I was only going down. It's great that I have this experience playing him in the final of a Masters. I know what to expect. I know how to prepare for it."

Nadal sees little to take from a windy Montreal win given the likely lack of breezes in the big stadium.

"Here the wind is not there. Of course, helps little bit," Nadal said. "But I think he's making the steps forward every single day."