Daniil Medvedev was roundly booed by the fans inside Louis Armstrong Stadium during his match against Feliciano Lopez. 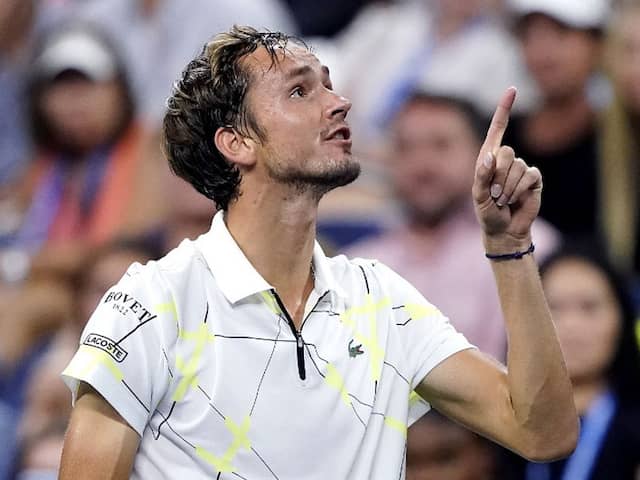 Daniil Medvedev received a code violation for angrily snatching the towel from a ballperson.© AFP

Daniil Medvedev faced a massive backlash after his middle-finger gesture angered the crowd during his third round match at the US Open on Friday. The Russian fifth seed was roundly booed by the fans inside Louis Armstrong Stadium during his match against Feliciano Lopez. Medvedev managed to overcome the hostile crowd, registering a 7-6 (7/1), 6-4, 7-6 (9/7), 6-4 win over the Spaniard to move into the last 16. After his win, in an astonishing post-match interview on-court, taunted the US Open crowd, telling them that their negative energy is what carried him to victory.

"First what I can say is, thank you all guys, because with your energy tonight gave me the win,"

"If you were not here guys, I would probably lose the match because I was so tired, I was cramping yesterday, it was so tough for me to play so I want to all you know when you sleep tonight, I won because of you. Again, the only thing I can say is that the energy you gave me right now guys, I think will be enough for my next five matches.

The more you do this, the more I will win for you guys."

Daniil Medvedev received a code violation for angrily snatching the towel from a ballperson, threw his racquet and then covertly raised his middle finger next to his head as he began to walk.

The incident was not seen by chair umpire Damien Dumusois but was caught on television and shown on video replay inside Louis Armstrong Stadium.

Medvedev said he apologized to the Spaniard and his coach after the match, insisting his meltdown was in no way related to his opponent.

Asked whether the New York crowd would forgive him after qualifying for the last 16, where he will meet German qualifier Dominik Koepfer, Medvedev replied he wasn't sure.

Comments
Topics mentioned in this article
Feliciano Lopez Tennis
Get the latest Cricket news, check out the India cricket schedule, Cricket live score . Like us on Facebook or follow us on Twitter for more sports updates. You can also download the NDTV Cricket app for Android or iOS.