Rafael Nadal claimed a 6-3, 6-2 victory over compatriot Pablo Andujar in 1hr 30min at at the Mexico Open in Acapulco. 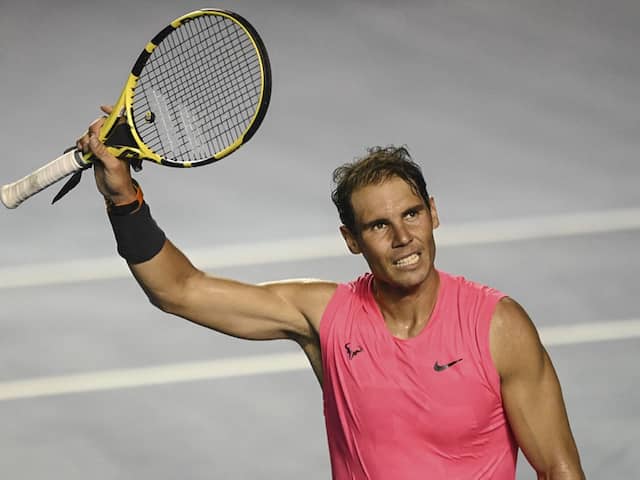 Rafael Nadal marked his return to action with a straight-sets victory over Pablo Andujar on Tuesday as he launched his bid to reclaim the world number one ranking at the Mexico Open in Acapulco. The 33-year-old Spaniard, playing for the first time since his quarter-final exit to Dominic Thiem at the Australian Open last month, claimed a 6-3, 6-2 victory over compatriot Andujar in 1hr 30min. "The most important thing when you have not competed for a while is to win, I needed a match like today to get in rhythm and gain some confidence," Nadal said after the victory.

Nadal suffered an early stumble, with Andujar grabbing a break of serve in the opening game as the 19-time Grand Slam winner took time to find his rhythm.

However, Nadal broke back quickly and then opened up a 5-2 lead. Andujar saved three set points to hold serve but Nadal easily held to take the first set.

Andujar never looked like finding a way back into the match in the second set as a dominant Nadal broke in the first game and kept up the momentum, to close out the win emphatically.

The top-seeded Nadal admitted afterwards he was still adjusting to the heat and humidity of conditions in Acapulco.

"It was an awkward first round game," Nadal said. "I had not competed for a while and the temperature change is drastic enough... but I am happy with the victory."

Nadal could regain his world number one ranking this week with a victory in Acapulco if rival Novak Djokovic fails to reach the semi-finals of the Dubai Duty Free Tennis Championships.

The Spanish star ceded the global top spot to Djokovic after the Australian Open, where the Serb won a record eighth title.