Andy Murray suffered a shock defeat to Radek Stepanek at Queen's Club but believes it gives him time to recover and prepare to defend his Wimbledon title. 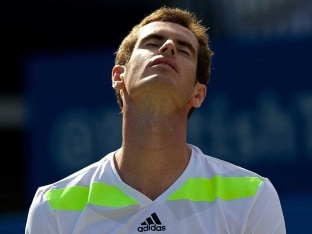 Andy Murray insists his shock Queen's Club defeat against Radek Stepanek could be a blessing in disguise because it gives him time to recover for the start of his Wimbledon title defence.

Murray's bid for a record-equalling fourth Queen's crown came to an abrupt end on Thursday as Czech veteran Stepanek took advantage of lacklustre display from the world number five to win 7-6 (12/10), 6-2.

On the surface the tame third round loss was a major blow to Murray's preparations ahead of Wimbledon, which gets underway on June 23, as it deprives him of valuable time honing his game on grass.

But the 27-year-old is confident he can still make any adjustments to his game during his extra practice time with new coach Amelie Mauresmo.

And perhaps even more importantly, the earlier than expected defeat means he can rest his aching limbs after the gruelling clay-court season which climaxed with Murray reaching the French Open semi-finals last week.

"I'll take a couple of days off because since the Monday before the French Open I've played every single day bar one. The body needs a little break just now," Murray said.

"Someone told me Novak (Djokovic) is on holiday in Ibiza. I know normally Rafa (Nadal), when he's finished the first week of the grass, spends four or five days at home in Majorca and rests up.

"Sometimes the rest is as important as the training, because you don't want to go into a tournament like Wimbledon tired and not fresh.

"So I'll take a couple of days off and then start practising Sunday evening and start getting ready."

While Murray is desperate to mount a successful defence of the Wimbledon title he won so memorably 12 months ago -- ending Britain's 77-year wait for a male singles champion at the All England Club -- he knows the tournament brings with it plenty of pressure, stress and unwanted attention.

The World Cup will take a little of the spotlight from Murray this year, but the presence of shock coaching choice Mauresmo will ensure he remains the most talked about player at the Championships.

With that in mind, Murray is relishing a rare opportunity to relax over the next few days with partner Kim Sears and his friends.

"I'll look forward to getting some peace and quiet before it gets hectic again towards the end of next week," Murray said.

"The next few days will be nice to have a bit of peace and quiet. "Obviously I get to spend some time with my friends which will be nice, so I'll watch quite a lot of the World Cup matches and go out for dinner."

Since losing to Roger Federer in the 2012 Wimbledon final, Murray had been unstoppable on grass - winning 19 successive matches in a glorious run that brought him Olympic gold, a third Queen's title and his first Wimbledon crown.

That has allowed him to build a large reserve of confidence about his performances on the surface and he is convinced his defeat at Queen's isn't a sign of potential problems ahead at Wimbledon.

"I don't think this so, I just need to spend time on the courts practising some things," he added.

"The difference between this year and last year is that I've played a lot of matches on clay in the last couple of weeks this time.

"Last year I had about a week to 10 days' preparation on grass before Queen's.

"That obviously helped me during the tournament because not all the other players had that.

"My best tennis has been on this surface, and all my best results have come after decent preparation time."