Petra Kvitova, ranked 11th in the world, is chasing a 28th tour title, having lost only nine finals. 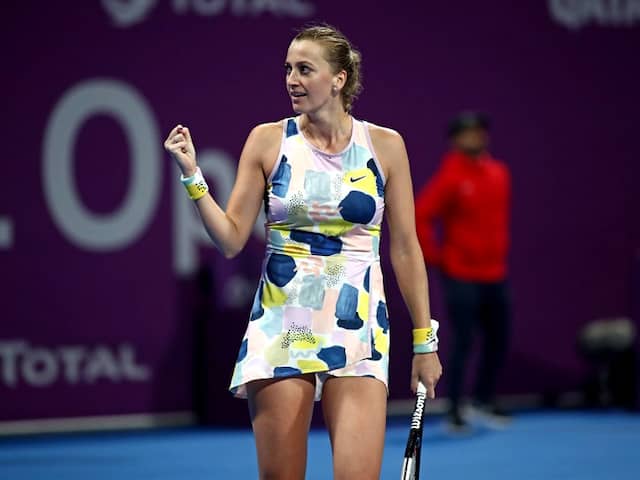 Petra Kvitova battled past world number one Ashleigh Barty 6-4, 2-6, 6-4 on Friday to set up a Qatar Open final against Belarusian Aryna Sabalenka. The two-time Wimbledon winner overcame a second-set blip to reach the 37th WTA final of her career and her second in Doha, where she won the 2018 title. Kvitova ended a run of four straight defeats by Barty, including in the Australian Open quarter-finals earlier this year.

"I did have chances in the last meetings with her as well, but today I was just maybe braver and that's how it is," Kvitova told wtatennis.com.

It will be Kvitova's first final since April last year in Stuttgart.

The 29-year-old Czech, ranked 11th in the world, is chasing a 28th tour title, having lost only nine finals.

"I always bring something else in the finals and I just love playing finals," said Kvitova.

"That's why I'm playing tennis, for those trophies, and playing a final is something like that, you are very close to have the title, but it's still very far."

She struggled for rhythm in the second set after dominating the first, but managed to clinch the crucial break in the seventh game of the decider.

"I think Ash started to play more slices in the beginning of the second set, so it took me a while to get to used to (it) and be back in my game with my aggressive game, which I tried to play in the first set," Kvitova added.

Australia's Barty has now lost in back-to-back semi-finals after her last-four loss to eventual champion Sofia Kenin in Melbourne.

"It's been a very positive week, it really has, and tonight was no different. It was an exceptional match," said the reigning French Open champion.

"Obviously you look at a match and you debrief it, but I think (it was) another really great contest with Petra."

"I'm really happy with the level I'm playing right now and well, we'll see what's going to happen tomorrow, but for sure I will bring everything I have," said the 21-year-old.

Comments
Topics mentioned in this article
Petra Kvitova Ashleigh Barty Tennis
Get the latest Cricket news, check out the India cricket schedule, Cricket live score . Like us on Facebook or follow us on Twitter for more sports updates. You can also download the NDTV Cricket app for Android or iOS.