Pavlyuchenkova has been working with Hingis officially for just a few weeks and the analytic game style and fighting determination of Switzerland's five-time grand slam champion may be rubbing off on the 21-year-old right-hander. 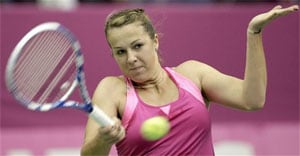 The third-seeded champion, coached by former Swiss great Martina Hingis, earned the fifth title of her career while leaving her opponent winless from five finals.

One of those was here a year ago, when Suarez Navarro was unable to close it out after winning the first set against Kaia Kanepi, an opponent she beat in the semi-finals this week.

The winner now owns five career titles, including two this season after winning the Monterrey event for a third time. She improved her record over Suarez Navarro to 4-0 in WTA play and 5-0 including a Challenger win on clay in 2008.

Pavlyuchenkova has been working with Hingis officially for just a few weeks and the analytic game style and fighting determination of Switzerland's five-time grand slam champion may be rubbing off on the 21-year-old right-hander.

Suarez Navarro has now lost two finals in 2013 after going down in Acapulco to 2012 Roland Garros finalist Sara Errani.

After the 23rd-ranked Suarez Navarro got off to an early break and looked like frustrating her opponent, Pavlyuchenkova suddenly settled in after what had been a nervy start for both players on the clay of the Estadio Nacional.

The first Russian to win the trophy here since Maria Kirilenko in 2008 slid into her comfort zone as her opponent's game began to suffer.

The Russian broke for 5-all to turn the momentum on its head, earning the set after 56 minutes as she converted on her first of three set points.

The match continued in a similar vein into the second set, with Pavlyuchenkova running out seven straight winning games to 3-0 before Suarez Navarro steadied with a love game for 1-3.

Suarez Navarro saved a break point to hold for 2-4 before going down to defeat in just over 90 minutes on a final break in the last game, ending with 43 unforced errors.

Comments
Topics mentioned in this article
Tennis David Ferrer Rafael Nadal Sara Errani Petra Kvitova Carla Suarez Navarro Ana Ivanovic Samantha Stosur Martina Hingis Venus Williams
Get the latest updates on ICC T20 Worldcup 2022 and CWG 2022 check out the Schedule, Live Score and Medals Tally. Like us on Facebook or follow us on Twitter for more sports updates. You can also download the NDTV Cricket app for Android or iOS.