Novak Djokovic 'Very Happy' With Winning Start To The Year 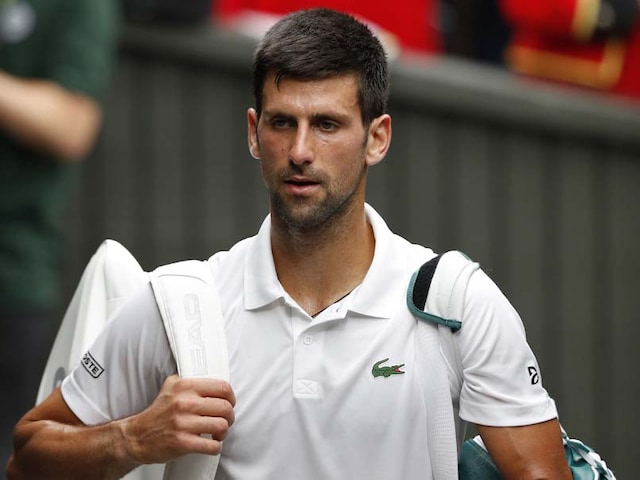 Six months after making a comeback from injury, Novak Djokovic made a resounding return on Wednesday. Djokovic revealed he felt "great" after beating world number five Dominic Thiem 6-1, 6-4 at the Kooyong Classic. The Serbian 12-time Grand Slam winner was in good form, and full of optimism, after his first competitive outing since losing a Wimbledon quarter-final to Tomas Berdych last July. "I feel great, I was eager to get onto the court," he said after playing with a flesh-coloured sleeve on his right arm. "I had a great opponent, it was a test for me to see where I am, how the work we did pays off on court. It worked pretty well."

The former world number one, who will be chasing a record seventh Australian Open crown next week, had pulled out of a warm-up tournament in Abu Dhabi, raising concerns over whether he would be fit enough to play at Melbourne Park. "There was a doubt, especially after I pulled out of the first week of the year," he admitted. "I personally didn't know what's going to happen. We did some treatment and obviously gave it a lot of thought," Djokovic said.

"Luckily... I'm here and so I'm hoping in the next four, five days everything will go well and I'll be ready for the Open." While pleased with his progress, Djokovic -- who has dropped to 14 in the world rankings -- admitted he still had work to do ahead of the opening Grand Slam of the year. "I don't want to be over-confident, but I'm very, very happy with how it went today," added the 30-year-old. "I don't say I'm at 100 percent, I can only say that when I get the feel of a tournament. Ideally I would have had another tournament before the start of the Open, but it was not meant to be.

"I'll take whatever I can -- one or two matches here will be good preparation." Thiem, who only arrived in Melbourne on Monday night from Doha after four days in bed with a virus, presented only a minimal challenge to the recharged Serb.

"I'm free of fever and healthy again," the Austrian said.

"I'm still jet-lagged and was slow at the beginning of the match. I'll sleep, eat and train and not do too much. I'll be fine for the Open." Australian Matthew Ebden, back on court after an injury- marred 2017, defeated Marin Cilic 6-7 (3/7), 6-4, 7-5 in another match at the exhibition tournament. World number six Cilic won the opener but found his game not quite up to competitive level as Ebden sneaked out the second set and then won a tight third.

Cilic, last year's losing Wimbledon finalist against Roger Federer, heads into his final practice days for the Australian Open content with his form. "The most important thing is to feel the conditions, to get comfortable," he said. "It's important to find a good rhythm.

"Overall, I'm quite happy with my level. I was feeling the ball well and hitting cleanly from both sides."

"It was tough... with the wind," the Swiss said. "She's a big hitter and there were not many rallies. You had to play the court and try to hit hard."

Comments
Topics mentioned in this article
Novak Djokovic Dominic Thiem Tomas Berdych Tennis
Get the latest Cricket news, check out the India cricket schedule, Cricket live score . Like us on Facebook or follow us on Twitter for more sports updates. You can also download the NDTV Cricket app for Android or iOS.