Federer will tackle Tomas Berdych, the world number six from the Czech Republic who has continued to cope well with a schedule requiring him to travel 3,000 miles from Marseille where he contested the final on Sunday. 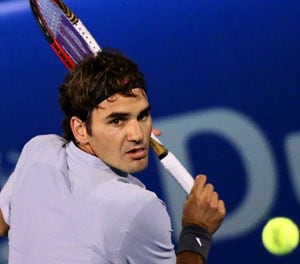 World number one Novak Djokovic and defending champion Roger Federer moved closer to a mouth-watering Dubai Open final showdown when they cruised into the last four on Thursday.

Australian Open winner Djokovic extended his unbeaten 2013 sequence to eleven with a trampling 6-0, 6-3 success over Andreas Seppi which suggested that he will be very hard to stop.

Djokovic's dashing court coverage and imposingly aggressive service returns so much intimidated Seppi, a talented ground-stroker, that the seventh-seeded Italian won only three points on his service in a morale-eroding 24-minute first set.

The second set offered only a little more comfort.

"I'm pleased that it was an even better performance than in my first two matches and that I'm elevating my level. Hopefully I can sustain that," he said of Friday's semi-final with Juan Martin Del Potro, the former US Open champion, who beat Daniel Brands, a German qualifier, by 6-4, 6-2.

It was a big-serving battle of the two tallest men in the tournament, and for a while, until 4-4 in the first set it seemed that Brands might be capable of creating further upsets in the Gulf.

He beat two leading Frenchmen, Gael Monfils and Jeremy Chardy, while reaching the semi-finals in Doha last month, but once Del Potro broke serve to snatch the first set, his chances of a third notable success evaporated.

Afterwards Del Potro revealed some of the obstacles to returning to his former prominence in a career which was damaged by a wrist injury which sidelined him for most of 2010.

"The good thing is it's not getting worse," he said rather ambiguously.

"I can hit my backhand often day by day, and it's a good thing to be a hundred percent."

He then cast doubts on how certain that was.

"I need to be ready for tomorrow (Friday). And I will have the rest of the day to recover in my wrist and do the best what I can."

He concluded: "I know against Djokovic I need to hit my backhand a hundred percent and then see if I have a little chance to win."

Federer will tackle Tomas Berdych, the world number six from the Czech Republic who has continued to cope well with a schedule requiring him to travel 3,000 miles from Marseille where he contested the final on Sunday.

Berdych also looked more comfortable than earlier during this week.

"I am making the transition," Berdych said, referring to the change from cold European indoor courts to the warm and sometimes windy hard courts of the coastal resort in Dubai.

His improvement appeared to make him relish another meeting with Federer, whom he has beaten five times in 16 tries - including at last year's US Open.

"Probably he knows what is working on him," said Berdych, who knows how to take time away from Federer with a fierce first strike.