The world's two best players rolled into the quarter-finals of the ATP and WTA Miami Masters, following a two-hour afternoon rain interruption which put Tuesday's programme well behind schedule. 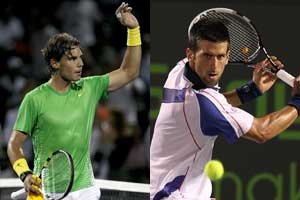 The world's two best players rolled into the quarter-finals of the ATP and WTA Miami Masters, following a two-hour afternoon rain interruption which put Tuesday's programme well behind schedule.

World number one Rafael Nadal lived up to expectations as the Spaniard strives for a first Miami title. The top seed reached the last eight over Ukrainian Alexandr Dolgopolov 6-1, 6-2 in just 59 minutes.

"It was very, very, very humid. That's why I'm sweating a lot," said Nadal, who said the long wait in the locker room did not bother him.

It was a similar outcome for second seed Novak Djokovic as he won his 21st consecutive match of the season over compatriot and Davis Cup teammate Viktor Troicki 6-3, 6-2.

Former US Open winner Juan Martin del Potro was at a loss for words after his fourth-round ouster at the hands of American Mardy Fish 7-5, 7-6 (7/5).

"It's difficult to say something now because I just lost a very, very tough match," said the Argentine.

"Maybe in two or three days I can say my level at the moment and what I expect for the future."

There was third-round disappointment for Jo-Wilfried Tsonga as the French 15th seed was unable to recover in his rain-interrupted match from Monday against Dolgopolov.

Ivanovic, a former world number one and French Open champ, led 5-2 in the final set before second seed Clijsters began her fightback.

The Belgian rallied in championship style to earn her place in the last eight of the last hardcourt event prior to the start of the clay campaign.

"Because I have been on the tour for many years, you realise that you have to keep trying until the last point is played," said Clijsters. "In tennis, that's sometimes probably the frustrating part about it.

The match had been delayed almost 24 hours after rain struck the event on Monday evening, a problem that returned on Tuesday.

Comments
Topics mentioned in this article
Tennis Milos Raonic Melanie Oudin Somdev Devvarman Rafael Nadal Novak Djokovic
Get the latest updates on ICC T20 Worldcup 2022 and CWG 2022 check out the Schedule, Live Score and Medals Tally. Like us on Facebook or follow us on Twitter for more sports updates. You can also download the NDTV Cricket app for Android or iOS.