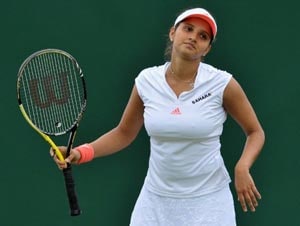 Mirza, battling a left knee injury suffered three weeks ago in a first-round Wimbledon exit, reached the Charleston quarter-finals in April as a qualifier but has won only once since and struggled again in a match that dragged past midnight to finish in the early hours of Tuesday.

"I felt like I was really rusty," Mirza said. "I played OK a few games and then I didn't. It was just a matter of putting together a few games, which I couldn't do.

"But the good news is the knee doesn't hurt, so that's the positive I can take."

The 24-year-old walked onto the court only an hour before midnight after rain and lighting delays and battled for 95 minutes against a 117th-ranked rival she ousted in qualifying for this year's Australian Open.

"It's not easy with the weather and everything and playing in the middle of the night," Mirza said.

Mirza, whose only WTA title came in 2005 on home soil in Hyderabad, was also worried about how her knee would make the transition to hardcourts in her first tune-up event for the US Open.

"I was a bit concerned about the knee. Hardcourt is tougher on the knee," Mirza said. "As we go to the US Open and courts get faster, I hope I can do better."

Mirza, ranked 62nd, was long with a backhand and forehand to surrender a break in the final game of the first set, then sent a forehand long to drop her fourth game in a row and fall behind 2-0 in the second set.

But Mirza fought back, winning the next four games in a row, saving two break points in the sixth game for a 4-2 edge, only to drop the final four games.

"I haven't played Razzano in a long time," Baltacha said. "I know its going to be a tough match, but I'm definitely looking forward to the challenge."

Vavara Lepchenko was leading fellow American Sloane Stephens 4-3 when their match was halted by darkness as the main stadium lights failed to start on schedule at the first-time WTA venue.

Peer was one victory shy of cracking the top 10 in April but has dropped five matches in a row over the past two months and slid 13 spots in the rankings from a career high.

Comments
Topics mentioned in this article
Tennis Stephanie Dubois Sania Mirza
Get the latest Cricket news, check out the India cricket schedule, Cricket live score . Like us on Facebook or follow us on Twitter for more sports updates. You can also download the NDTV Cricket app for Android or iOS.