France's Gael Monfils, returning to tennis after an injury layoff, reached the semi-finals of the ATP Thailand Open on Friday with a 7-5, 7-6 (7/4) win over Jarkko Nieminen. 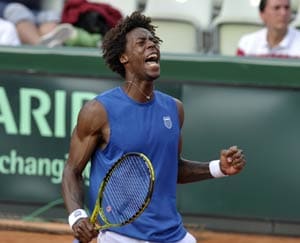 France's Gael Monfils, returning to tennis after an injury layoff, reached the semi-finals of the ATP Thailand Open on Friday with a 7-5, 7-6 (7/4) win over Jarkko Nieminen.

Monfils, who rested for nearly a month after exiting early at the US Open with a knee problem, set up a showdown with American surprise package Donald Young, who thumped Japan's Go Soeda 6-1, 6-2.

World number nine Monfils had a much easier time than he did in his opening match, where he needed three sets to beat Santiago Giraldo.

"I was away from tennis for a long time and I woke up a bit sore this morning," said the French right-hander, playing in his ninth quarter-final of 2011. "But my level felt better in this match than the first one.

"There are still things to fix in my game. I was not that strong at the beginning but then had to make some adjustments.

"My knee feels fine but I have to be careful with it. It still needs icing and stretching."

Nieminen romped into an early 3-0 lead before Monfils found his range, breaking back for 2-3 and taking the lead 4-3 with a second break, wrapping up the opening set in just under three-quarters of an hour.

The second set went to a tiebreak after the 30-year-old Finn saved a break point in the 11th game, with Monfils leading all the way in the decider before closing the door on his first of two match points.

Monfils won his only previous meeting with the 55th-ranked Young, beating him in 2008 in Cincinnati. The 22-year-old former American prodigy has failed to live up to his early promise.

Comments
Topics mentioned in this article
Tennis Yen-Hsun Lu Gilles Simon Andy Murray Gael Monfils Jarkko Nieminen Donald Young
Get the latest Cricket news, check out the India cricket schedule, Cricket live score . Like us on Facebook or follow us on Twitter for more sports updates. You can also download the NDTV Cricket app for Android or iOS.