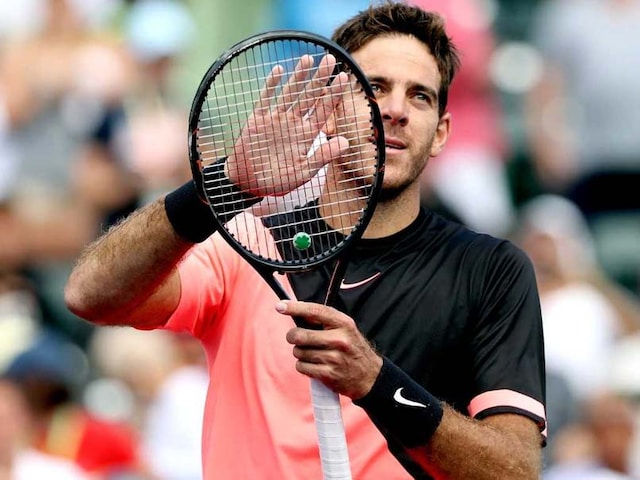 Juan Martin del Potro sent his devoted fans home happy Tuesday by powering into the ATP Miami Open quarter-finals with a 6-4, 6-2 triumph over Serbian Filip Krajinovic. Roared on by a partisan crowd, the 29-year-old Argentinian recovered from 1-4 down in the first set to reel off nine games in a row on his way to a last-eight match with Canada's Milos Raonic on Wednesday. Del Potro's welcome return to form and fitness saw him win the Indian Wells title and continue to impress at the last tournament in Key Biscayne before a move north to the NFL Miami Dolphins home stadium next year.

"Playing here they make it special for the South American players and I am trying to enjoy the last time playing in Key Biscayne," Del Potro said. "I know many Argentine fans live here and are so close. I will miss them."

Windy conditions hampered players all day and the former US Open champion took time to find his groove in his first meeting with 27th-ranked Krajinovic.

"The weather was so bad to play tennis. We couldn't feel the ball 100 percent. We couldn't hit from the baseline," Del Potro admitted.

"I'm confident I will feel better tomorrow. The better weather will make me feel better on court."

Raonic, who easily saw off Frenchman Jeremy Chardy 6-3 6-4, lost to del Potro in the Indian Wells semi-finals and will be eagerly seeking revenge.

"It will be a different match to the one we played in Indian Wells, different conditions," Del Potro said. "Milos is improving and playing very solid. He has the potential to win the tournament. It will be a good match to test my fitness and see what level I'm at.

"I don't feel pressure. I am just going down my own road and seeing how far I can get. I am not thinking about ranking or anything. Just the last time here in Key Biscayne."

The Croatian's run was halted by big-serving Isner in just 87 minutes to set up a last-eight meeting with South Korean 19th seed Chung Hyeon.

It was a fine performance by Isner, the 14th seed, who rattled down 12 aces and was boosted by winning 85 percent of points on his first serve.

All three of Isner's wins over the 2014 US Open champion have now come in ATP Masters events and once a first set tie-break was negotiated in windswept conditions, the 32 year-old confidently held his nerve to send Cilic home.

Isner has never won an ATP Masters event but this display has fueled hopes this could be his time.

"I think in these events, the format is very good for me: two-out-of-three sets," Isner said.

"In a situation like that, if I'm feeling fit and healthy, which I am, and serving like I did today, I can beat a lot of people playing like that."

Comments
Topics mentioned in this article
Juan Martin del Potro Marin Cilic Milos Raonic Tennis
Get the latest Cricket news, check out the India cricket schedule, Cricket live score . Like us on Facebook or follow us on Twitter for more sports updates. You can also download the NDTV Cricket app for Android or iOS.