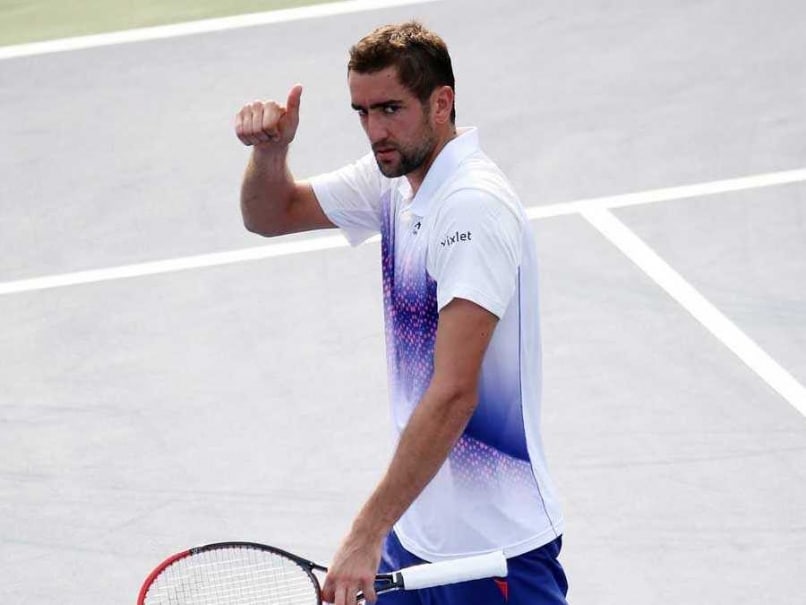 Marin Cilic of Croatia reatcs against Guido Pella of Argentina during their Rd 1 match of US Open 2015.© AFP
New York:

Marin Cilic shrugged off being shunted off to the Louis Armstrong Stadium on Monday where his status as defending US Open champion was saluted by just a smattering of fans. (Complete US Open 2015 coverage)

The Croatian stunned tennis last year when he defeated Roger Federer in the semi-finals and Kei Nishikori in the championship match to lift his first -- and so far only -- Grand Slam title.

But the 26-year-old was not afforded the honour of a return to showpiece Arthur Ashe Stadium where he trimphed 12 months ago.

"Louis Armstrong Court is not that small. It was a pretty nice crowd out there for a hot day today," said ninth seed Cilic.

"It's pretty humid. The match before went five sets. The crowd also needs some refreshments. But, you know, I'm not too bothered by the court where I'm playing.

"The courts here are all pretty big. Definitely, of course, Arthur Ashe is the place where I was playing the best, so looking forward to come back there."

Cilic, coached by compatriot and 2001 Wimbledon winner Goran Ivanisevic, is getting used to life in the shadows of the sport despite his major-winning status.

However, like Ivanisevic, he is a folk hero back home, with Cilic even managing to name-check his small hometown in his Monday news conference.

"I felt the most special welcome was in my hometown, Medugorje, population of 5,000 people," said Cilic, handing the tournament media conference stenographers the added challenge of Croatian geography.

"But it was an incredible reception. Most of the people there I know from when I was a kid. It was incredible.

The road between last year's US Open and this year's edition has not been smooth.

A soulder injury forced Cilic to skip the Australian Open and his season only got underway in March.

But a quarter-final run at Wimbledon suggested that the perils are behind him, even if he has become something of a marked man since his New York heroics of last year.

"It changes, absolutely, in your mind looking at the tournament. It's for sure a different approach," said Cilic on his preparation both on and off the court.

"I am feeling that definitely it's a pressure thing to do that, but, of course, if you approach it in the right way, as I'm trying to, it gives me more positive looks at it."

With Nishikori defeated by France's Benoit Paire, the champion's path to the quarter-finals was eased, although Spanish grinder and seventh seed David Ferrer remains in his section.

"I'm more focused on myself and know that I have the abilities to win," he said.

Comments
Topics mentioned in this article
Marin Cilic Guido Pella Tennis
Get the latest updates on IPL Auction 2023 and check out  IPL 2023 and Live Cricket Score. Like us on Facebook or follow us on Twitter for more sports updates. You can also download the NDTV Cricket app for Android or iOS.