Bhupathi-Bopanna in semi-finals of Rome Masters 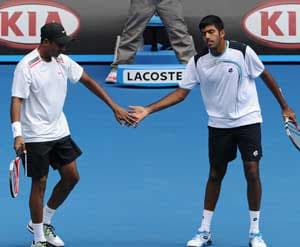 The seventh seeded Indians took an hour and nine minutes to get the better of the top seeds, 6-4, 7-5.

Bhupathi and Bopanna won 79 percent of their service points, and converted a break of serve in each set to wrap up the victory.

They will next take on third seeds Marcel Granollers and Marc Lopez, who entered the semi-finals after beating Michael Llodra and Nenad Zimonjic 6-4, 6-2.