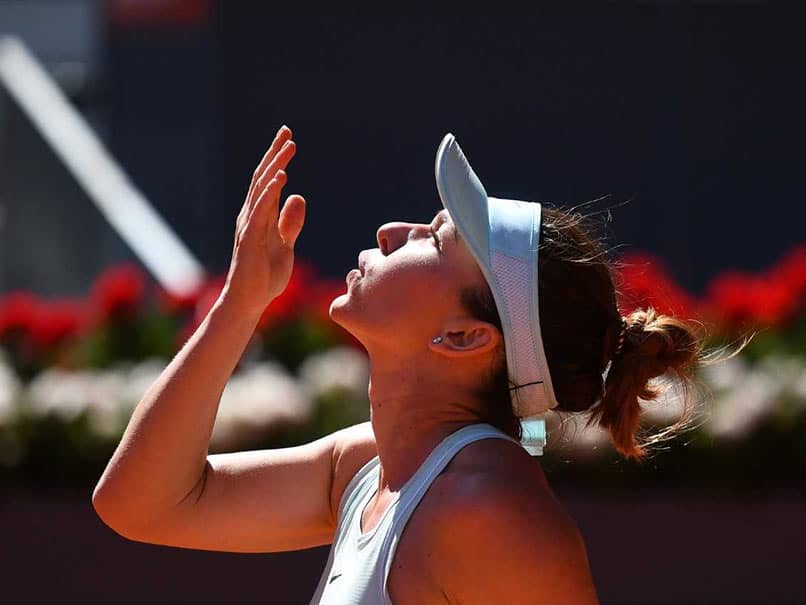 Simona Halep closed in on a return to the top of the world rankings after beating Belinda Bencic 6-2, 6-7 (2/7), 6-0 on Friday to advance to the Madrid Open final, while men's top seed Novak Djokovic made the semi-finals without hitting a ball. Halep, currently number three in the world, will reclaim the number one ranking should she win her third title at the Caja Magica. Bencic had defeated Halep in their last two matches, but the reigning French Open champion, who lifted the trophy in Madrid in 2016 and 2017, came through in just under two hours.

World number one and two-time Madrid champion Djokovic, meanwhile, walked into the semi-finals when ninth seed Marin Cilic withdrew before their match with stomach problems.

"I am sorry to announce that I must withdraw from today's match. I have had a terrible night dealing with a case of food poisoning," wrote Cilic in a statement.

"I am extremely disappointed to have my time in Madrid end in this way. Thank you for the support."

In the semi-final on Saturday, Djokovic will face either Roger Federer or 2018 finalist Dominic Thiem.

"It's such a nice feeling to be back in the final here. I really enjoy playing in Madrid, it motivates me," Halep said.

The third seed comfortably claimed the opening set but let her game lapse slightly in the second.

Bencic, who opened the door for Halep to possibly return to the top of the world ranking with her quarter-final defeat of current number one Naomi Osaka, took a tight second set in a tiebreaker.

But Halep pulled herself together to blitz Bencic in the third as she raced to a victory that increases her chances of returning to the top of the pile.

"I was rushing too much in the second-set tiebreaker," Halep said. I was missing too many easy balls -- I lost control of that tiebreak.

"In the third I just started over again, I played smarter, opening up the court and being more aggressive."

Novak Djokovic Marin Cilic Tennis
Get the latest updates on IPL 2020, check out the IPL Schedule for 2020 and Indian Premier League (IPL) Cricket live score . Like us on Facebook or follow us on Twitter for more sports updates. You can also download the NDTV Cricket app for Android or iOS.