Hewitt added that the ATP, which runs the men's game, did not do the best job of communicating the crackdown to players either. 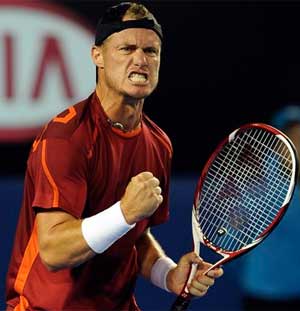 Kooyong Classic finalist Lleyton Hewitt is no fan of a new time crackdown instigated this season by the ATP, with warnings and even point penalties starting to flow on court for slow play.

The Australian criticised the inflexibility of strict enforcement of the longstanding rule which limits the time between points to 25 seconds in ATP events and just 20 at Grand Slams, starting at the Australian Open from Monday.

"I thought it went over the top in Brisbane (last week)," Hewitt said on Thursday. "I've never gotten time a violation that I can recall, and I'm not fast by any means.

"But it made us all think about it (the rule) and that's not a good thing for tennis. The game is hard enough as it is without that on your mind.

Hewitt added that the ATP, which runs the men's game, did not do the best job of communicating the crackdown to players either.

"I first heard the news at the net for my Brisbane doubles, it was the first I'd heard of it, but perhaps I don't check my email enough."

Hewitt will meet either Argentina's Juan Martin del Potro or Cypriot Marcos Baghdatis in the final on Saturday.