Former world number one Hewitt, about to play his 17th straight Australian Open, will face either Marcos Baghdatis or Juan Martin del Potro for the Kooyong title on Saturday. 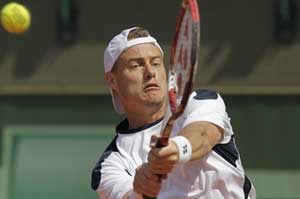 Lleyton Hewitt pronounced himself in near-perfect form after a 6-3, 6-2 demolition Thursday of world number six Tomas Berdych sent the Australian into the final of the Kooyong Classic.

Hewitt, who won the title on his first appearance at the eight-man exhibition in 2011, took 88 minutes to subdue his Czech opponent, who admitted he was struggling with his game.

Former world number one Hewitt, about to play his 17th straight Australian Open, will face either Marcos Baghdatis or Juan Martin del Potro for the Kooyong title on Saturday.

"In the end I felt really good," said the veteran Australian, now ranked 82nd after undergoing a second foot operation a year ago.

"Berdych has such weight of shot and hits so cleanly, I needed a few games to get used to his game.

"I got confidence and didn't allow him to dictate. It was a good scoreline for me, but it was tighter than it looked.

"The body felt great, my confidence was up and I was really happy with my ball-striking. I attacked his serve and put him under pressure, more than he was giving to me," the 31-year-old added.

Berdych said he had concerns about his game.

"I'm not feeling myself on the court. It's not what I expect from myself. I need to speak with my coach about what he sees," he said.

"It's nothing to do with an injury, it's just me and the timing of the ball. The comfort is not there. I need to feel strong from the baseline in my game and I need to get that back.

"I was very tired at the end of a long 2012 season, but I need to deal with that and do my best next week (at the Australian Open)."