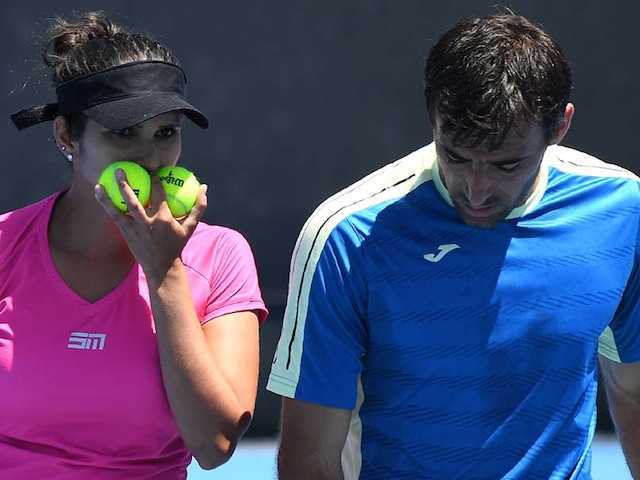 The No.2 seeds Sania Mirza-Ivan Dodig were stunned 2-6, 4-6 in the final by unseeded pair of Abigail Spears-Juan Sebastian Cabal in the 2017 Australian Open mixed doubles final. The Indo-Croatian pair were under pressure from the outset and despite fighting back well in the second set, poor service games and unforced errors cost them dear. Sania, who has won three mixed doubles titles so far, the last being the 2014 US Open with Brazilian Bruno Soares, were looking for her first Grand Slam title with Dodig but failed to cross the last hurdle.

Get highlights of the 2017 Australian Open Mixed Doubles final here.

11:51 IST: That's it from us here. Do join us for the big men's singles final between golden oldies Roger Federer and Rafael Nadal in about two hours time.

#Spears: "It is an amazing event and we as players do love coming here.

This one was for my Mum" #ausopen pic.twitter.com/X81Xb5ilua

11:43 IST: Sania Mirza will be disappointed. Not the best of performance from the Indo-Croatian pair. They never looked up for it.

11:39 IST: Cabal to serve for the mixed doubles title. Sania-Dodig need to break to stay alive.

11:38 IST: Another double fault and Spears-Cabal get the crucial break. They lead 5-4.

11:22 IST: The Indo-Croatian pair are having a much better time in the 2nd set. Dodig has upped his game and the results are clear to see.

11:10 IST: Unforced error from Cabal gives the Indo-Croatian pair take the lead in the 2nd set.

11:06 IST: That set lasted just 26 minutes! Sania-Dodig need to regroup and get their game on!

The Mixed Doubles Final is underway on RLA!

11:03 IST: Break point for Sania-Dodig! Their first of the final.

11:02 IST: Dodig with a brilliant return and it's 0-30 on the unseeded team's serve. Opening for Sania and Dodig.

10:58 IST: Deuce on Sania's serve. Cabal is racing to volley the ball on every opportunity.

10:53 IST: Sania-Dodig finally get on the scoreboard as Dodig holds serve. They trail 1-4.

10:50 IST: Spears easily holds serve as Spears-Cabal take 4-0 lead vs Sania-Dodig in 1st set. This is a romp and was not expected. Sania-Dodig are the No.2 seeds but are struggling big time in the final.

10:47 IST: Sania's serve is broken this time. Sluggish start for the Indo-Croatian pair. They trail 0-3

10:42 IST: Spears-Cabal break Dodig's serve in the first game. Poor start for the Indo-Croatian pair. They had started slowly in the semifinals as well.

10:05 IST: After a Serena's historic show on Saturday, we have much to look forward to on Sunday, starting with Sania Mirza's quest for a 7th Grand Slam title.

10:03 IST: The final day of Australian Open promises to be a cracking one for the tennis world.

10:02 IST:  Hello and welcome to our live tennis blog for the all-important final of the mixed doubles of the Australian Open.

With Dodig, she had an opportunity to win last year when she reached the French Open final but lost to compatriot Leander Paes and her then women's doubles partner Martina Hingis in the summit clash.

Sania is the lone Indian to have made all the way to the first Grand Slam final of the season as Paes, Rohan Bopanna, Purav Raja, Divij Sharan and juniors -- Zeel Desai and Siddhant Banthia -- all made early exits.

Comments
Topics mentioned in this article
Sania Mirza Ivan Dodig Tennis Live Blogs
Get the latest Cricket news, check out the India cricket schedule, Cricket live score . Like us on Facebook or follow us on Twitter for more sports updates. You can also download the NDTV Cricket app for Android or iOS.