Veteran Leander Paes' final ATP Tour match on home soil ended on a disappointing note as he and his partner Matthew Ebden lost to Indian pair of Purav Raja and Ramkumar Ramanathan. 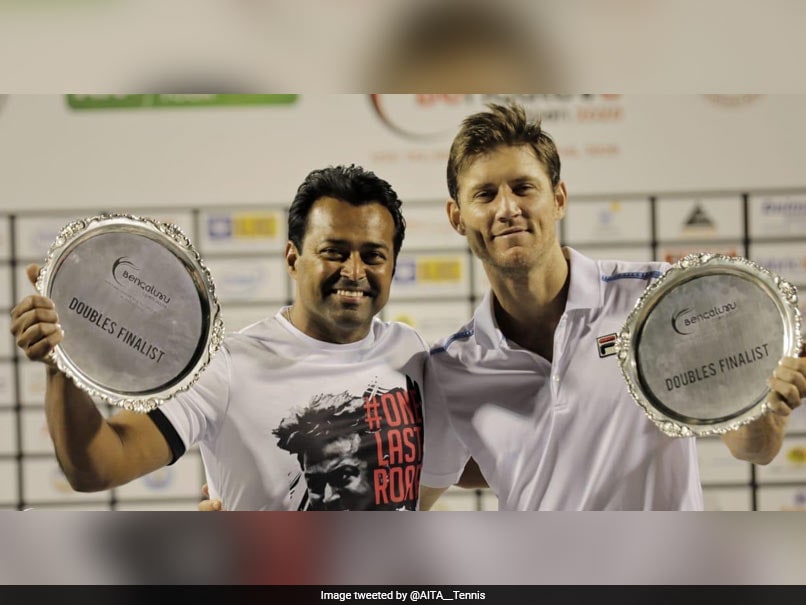 Veteran Leander Paes'final ATP Tour match on home soil ended on a disappointing note as he and his partner Matthew Ebden lost to Indian pair of Purav Raja and Ramkumar Ramanathan in the men's doubles final of the Bengaluru Open on Saturday. Paes, who is playing his final year of professional tennis, and his Australian partner Ebden were no match for their rivals, losing 0-6 3-6 in the summit clash that lasted just 56 minutes.  Paes, 46, and Ebden had qualified for the final after beating third seeds Andre Goransson of Sweden and Indonesia's Christopher Rungkat 7-5 0-6 10-7 in the semifinals.

Raja and Ramanathan, on the other hand, entered the last-four round after Saketh Myneni and Matt Reid of Australia conceded the other semifinal contest.

India's campaign in singles came to an end on Thursday after the likes of Prajnesh Gunneswaran, Sumit Nagal, Ramkumar Ramanathan, Saketh Myneni, Niki Poonacha and Sidhart Rawat -- all crashed out.

After the defeat, an emotional Paes said he will miss the massive support from the home crowd.

"The fact that I've played my last match in India - it sunk in after the match when I was signing autographs. A young girl - must have been five or six years old - gave me a 'One Last Roar' t-shirt which was twice her size," he said.

"She gave it to me and said, 'Leander, can you sign this?'. She must have been about 40 years younger to me, and she wanted my autograph. It meant a lot to me, because she recognised the effort I have put into my career.

"And when I signed the t-shirt and gave it to her, she turned around and said 'Bye'. She said bye. That's a great way to go," Paes added.

Comments
Topics mentioned in this article
Tennis Leander Paes
Get the latest updates on IPL 2021, check out the IPL 2021 Schedule and Indian Premier League Live Score . Like us on Facebook or follow us on Twitter for more sports updates. You can also download the NDTV Cricket app for Android or iOS.