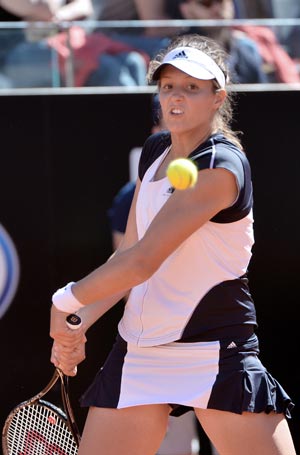 Venus Williams lost in the first round of the Italian Open to Laura Robson. Now sister Serena will get a chance to even the score.

Robson won the Wimbledon junior title at 14 and at last week's Madrid Open, she upset fourth-seeded Agnieszka Radwanska before losing in the third round to 16th-seeded Ana Ivanovic in a third-set tiebreaker.

"I just like it on big courts against these huge players because I just go out there with nothing to lose," the 39th-ranked Robson said. "I can remember seeing (Venus) play at Wimbledon when I was about 10 and I was kind of blown away with the speed that she hit the ball.

"Today when she hit it in the center of the racket it was basically point over, so I just had to take my chances."

Both players struggled with the wind at the Foro Italico, with Robson hitting eight double-faults and Williams six. However, Williams' errors came at more inopportune times, with two double-faults in the final game.

"It's always hard to play high quality tennis in that wind," Robson said. "I wish it could have been a higher standard but I'm happy to have won."

Serena, who won the Madrid title Sunday, watched the match from the stands.

"(Robson) has a great game," the younger Williams sister said. "She's really young, still. She's just so free and she looks great on the court and she's so smooth and she's a lefty, so that just adds a notch to her whole level.

"I've never played her before. I've always wanted to. So I have a tough second-round match."

Serena's only title at this clay-court tournament came in 2002 but if she continues playing the way she did in Madrid - and in her previous two tournaments, which she also won - she'll be difficult to beat.

"She is playing probably her best tennis," Robson said. "So it's going to be insanely tough but I'm just going to go out there and do my best."

This tournament is the last major warm-up for the French Open, the year's second Grand Slam, which starts May 26.

The top 32 players get seeded for Grand Slams.

The top-eight seeded players in Rome have first-round byes.

In a night match that was suspended briefly due to a lights outage, 59th-ranked Kiki Bertens of Netherlands beat 2010 French Open champion Francesca Schiavone 7-6 (5), 6-1.

Nishikori, who upset Roger Federer in Madrid last week, called for a trainer while leading 4-3 in the second set to tend to his right thigh but did not appear slowed while closing the match out.

Meanwhile, 10th-seeded Janko Tipsarevic withdrew from the tournament with bronchitis and Lukas Rosol took his place in the draw.

Also, sixth-seeded Angelique Kerber withdrew with an abdominal injury and was replaced by Lourdes Dominguez Lino of Spain.

Comments
Topics mentioned in this article
Tennis Svetlana Kuznetsova Venus Williams Andy Murray
Get the latest updates on ICC T20 Worldcup 2022 and CWG 2022 check out the Schedule, Live Score and Medals Tally. Like us on Facebook or follow us on Twitter for more sports updates. You can also download the NDTV Cricket app for Android or iOS.