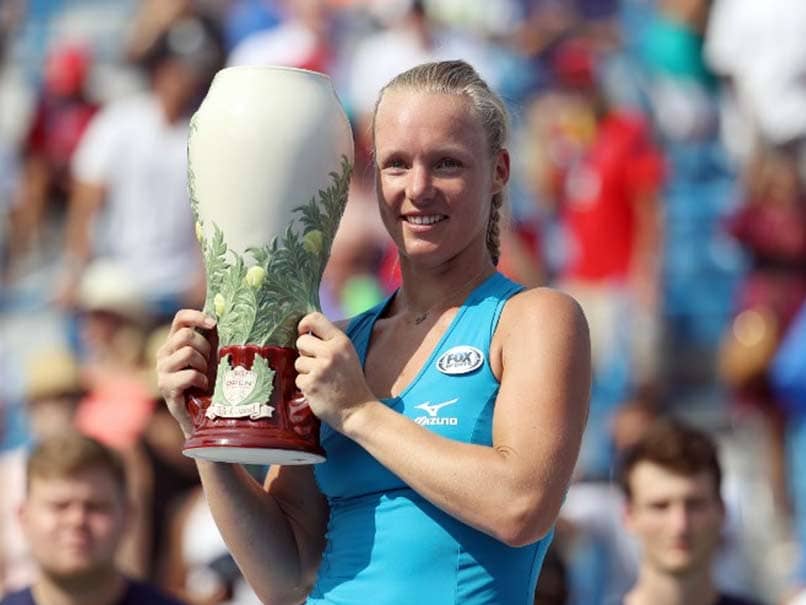 Dutch challenger Kiki Bertens profited from a third-set collapse by Simona Halep to score the biggest win of her career Sunday, beating the world number one 2-6, 7-6 (8/6), 6-2 in the Cincinnati WTA final. "This is the best day of my career, winning on a surface that you didn't really like. That's a great feeling. I'm just so proud, and it's such a great feeling to hold the trophy at the end of the week," Bertens said. Halep, who claimed the Montreal title a week ago and came into the final on a nine-match winning streak, ran out of reserves and was unable to stop the mounting Bertens momentum.

"I've lost three finals here, but maybe I will able to win one at this tournament because I love to play here," said Halep, who fell to Serena Williams in the 2015 final of the hardcourt US Open tuneup and to Garbine Muguruza in the title match last year.

"I had match ball, so I was there," Helep said. "I didn't take my chance. In the third set I was empty and I couldn't fight anymore."

The upset took just over two hours and marked the 10th time this season that 17th-ranked Bertens has defeated a top 10 opponent.

"It was such a tough match, and after winning that second set I knew, anything is still possible -- just keep on going," said Bertens, who claimed a sixth career WTA title.

"Winning a title like this, my first hard court title, and against number one of the world, getting my career high on Monday ... it's just coming everything together, I guess," she added.

Bertens saved a Halep match point in the second-set tiebreaker to stay alive.

"I'm a little bit upset because I couldn't manage better today, but that's it. I'm like this, and I have to work more," Helep said.

Halep had looked like ending a quick afternoon with a victory after breaking Bertens twice to sweep the first set.

But the 26-year-old Dutchwoman, who had considered retiring last season due to poor results, began to turn the tide in the second as she broke for a 3-1 lead.

Halep got that break back in the eighth game to make it 4-all, and took tighter control in the tiebreaker.

But Bertens won four games in the decider to take a 4-2 lead and quickly seized the set seconds after saving the match point.

Halep seriously faded in the final set, going down two breaks to trail 1-4.

Bertens kept up the pressure and advanced with a winner on her first match point, posting her second career win over Hale six years after beating her for the first time.

The depleted Halep is still entered as top seed in the upcoming WTA tournament in New Haven, which ends just two days prior to the start of the US Open in New York.

While not specifying if she will actually play, Halep said she would travel to Connecticut on Monday.

"For sure I need a little bit of rest because I'm exhausted.

"But also I take the positive from these two weeks," she added. "It's a great confidence (builder), and I'm looking forward actually for the next one to be better on court."

Comments
Topics mentioned in this article
Kiki Bertens Simona Halep Tennis
Get the latest updates on India vs Australia Series, check out the India vs Australia Schedule for 2020-21 and Ind vs Aus live score . Like us on Facebook or follow us on Twitter for more sports updates. You can also download the NDTV Cricket app for Android or iOS.