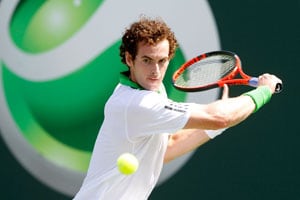 "I was trying to get myself back into the match, trying to find ways," Murray said. "But I just didn't have that spark."

The Scotsman hasn't won a set in three matches since he was routed in the Australian Open final by Novak Djokovic.

"I know it has only been a couple of months of the year," Djokovic said, "but I have been playing great, and I want to keep on doing that."

Murray, meanwhile, has lost nine consecutive sets, a remarkable drought for a player ranked fifth in the world.

"The same thing happened around the same time last year," Murray said. "I have been practicing well, training well, and then in the matches can't get anything going."

A year ago Murray lost opening-round matches in back-to-back tournaments, including at Key Biscayne as defending champion. This swoon is worse, with consecutive defeats against players ranked outside the top 100.

Donald Young was ranked 143rd when he upset Murray two weeks ago at Indian Wells. Bogomolov is ranked 118th, and his only other win over a top 10 player came in 2002, his senior year in high school, when he beat No. 3 Tommy Haas in Los Angeles.

Born in Moscow, Bogomolov moved to the United States at age 11 and lives in New Jersey. He has never been ranked higher than 97th but has played well this year on the minor-league circuit.

An hour after his big victory, Bogomolov said the news had spread quickly.

"I was just checking the 20 text messages I received from people I haven't heard from for 20 years," he said.

While his victory gave U.S. tennis fans something to brag about, the last American in the women's draw was eliminated in the second round when Varvara Lepchenko lost to Petra Kvitova 6-1, 6-2.

Defending champion Kim Clijsters needed only 50 minutes to win her opening match, beating qualifier Anastasiya Yakimova 6-1, 6-1. The No. 2-seeded Clijsters was playing for the first time since retiring two weeks ago in the fourth round at Indian Wells with a right shoulder injury.

"It's not fully healed, but it's healing," she said. "After Indian Wells I was pretty worried. Now I feel that I'm almost able to do everything that I want."

Juan Martin del Potro took another step in his comeback from right wrist surgery by edging No. 29 Philipp Kohschreiber 6-7 (3), 6-4, 7-5.

Murray's biggest problem against Bogomolov was serving. His first serves ranged from 133 mph to 95, and he complained of being unable to find a rhythm after holding only three times in 10 service games.

"You serve one at 130 and then the next one at 95 and then one at 115," he said. "There's no consistent sort of hitting the serves and feeling good about them. There was no consistency on any part of my game, really."

Murray looked sluggish with his footwork and repeatedly steered groundstrokes into the middle of the court, allowing to Bogomolov to take charge of rallies.

"In the second set I definitely felt like he's missing something," Bogomolov said. "Everybody goes through that."

Murray couldn't catch a break, either. In the final game, Bogomolov hit a forehand that kissed the net cord and dropped over for a winner.

That one left Murray mumbling.

"It's not unlucky, but ... " Murray said. "When you're not playing that well and you're struggling a little bit, you start to miss balls by a few inches, and net cords, challenges and stuff seem to go against you more."

Comments
Topics mentioned in this article
Alex Bogomolov Jr. Tennis Andy Murray Caroline Wozniacki Andrea Petkovic Maria Sharapova
Get the latest updates on ICC T20 Worldcup 2022 and CWG 2022 check out the Schedule, Live Score and Medals Tally. Like us on Facebook or follow us on Twitter for more sports updates. You can also download the NDTV Cricket app for Android or iOS.