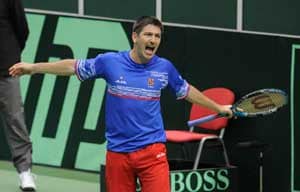 The 43th-ranked Golubev broke his 101st-ranked opponent in the seventh game of the decisive fifth set and again in the ninth, converting his second match point with a forehand winner to win in 3 hours, 37 minutes.

The doubles are scheduled for Saturday and the reverse singles for Sunday.

Comments
Topics mentioned in this article
Tennis Andrey Golubev Juan Monaco Novak Djokovic Rafael Nadal Jan Hajek Czech Republic
Get the latest Cricket news, check out the India cricket schedule, Cricket live score . Like us on Facebook or follow us on Twitter for more sports updates. You can also download the NDTV Cricket app for Android or iOS.