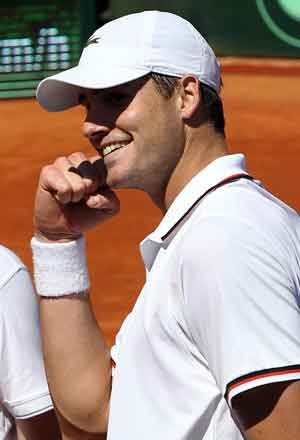 Isner, the second seed, fired 11 aces and saved all six break points that he faced in the all-American quarter-final to improve to 19-6 for the season and keep alive his hopes for a first clay-court title.

Lopez is chasing his third ATP title and his first on clay.

The other semi-final will see Argentine fourth seed Juan Monaco, who edged South Africa's Kevin Anderson 7-6 (7/4), 7-5, take on US qualifier Michael Russell, who outlasted Ryan Harrison 6-1, 5-7, 6-3 in another all-American quarter-final.

Anderson, ranked 33rd, was denied a chance for his second title in as many months after taking his second career ATP crown last month at Delray Beach, Florida.