Johanna Konta requested medical attention just a few minutes into her 6-4, 6-4 first round loss to the unseeded Marie Bouzkova. 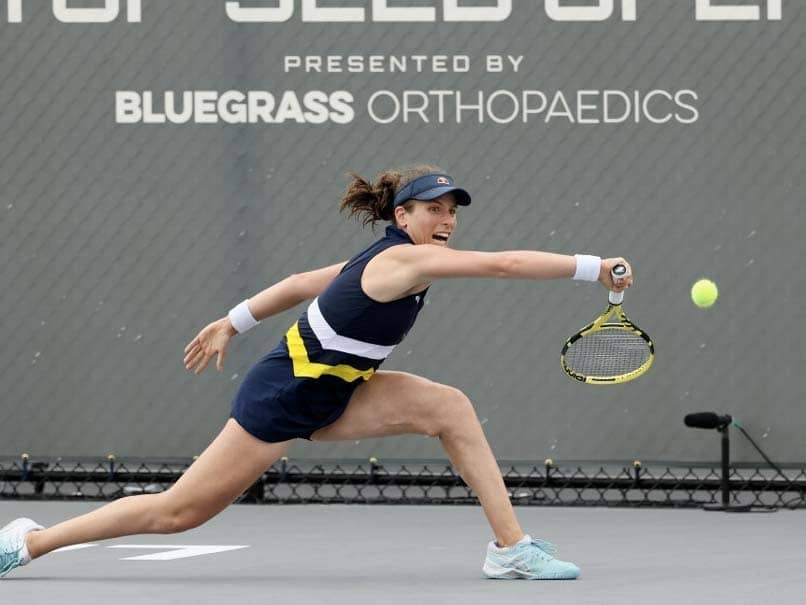 Johanna Konta explained that she is prone to sudden palpitations that can send her heart rate soaring.© AFP

Britain's Johanna Konta suffered a health scare as she crashed out of the opening round of the WTA Top Seed Open in Lexington on Monday with a straight sets defeat to the Czech Republic's Marie Bouzkova. Third seed Konta requested medical attention just a few minutes into her 6-4, 6-4 first round loss to the unseeded Bouzkova. The 29-year-old Briton looked uncomfortable and kept holding two fingers to her neck to check her pulse before eventually resuming play. Konta later explained that she is prone to sudden palpitations that can send her heart rate soaring.

"My heart rate shoots up for no reason, we didn't have a long point, I wasn't gassing in any way in my lungs," Konta said.

"It makes me a bit lightheaded, I just had to see the doctor and the physio.

"I was having all the checks. I am as fit as a fiddle but it can happen. It took a while to settle down until about 4-3 in the first set, but then it did settle down and I was able to concentrate on the tennis."

Konta said it was the fourth time she had been affected by the problem during tournament play or practice.

"We don't know why it happens, it's in stressful situations, in non-stressful situations. It's been sporadic and we haven't been able to capture it. I get very lightheaded and I can't function for the first few seconds," she said.

"I am worried. It's not ideal. I am going to have another EKG (electrocardiography) test, and hopefully measure it. But probably now it won't happen again for another year or something."

Konta, the world number 15, was the highest profile casualty on Monday in the opening round of the inaugural WTA event in Kentucky.

Other seeded players in action made it safely into the second round, with Polish sixth seed Magda Linette beating the United States' Lauren Davis 6-2, 6-2, and Tunisia's Ons Jabeur, seeded eight, downing another American, Caty McNally, 6-2, 6-4.

This week's event is the first WTA tournament to be held in the United States following a five-month hiatus caused by the coronavirus pandemic.

Comments
Topics mentioned in this article
Johanna Konta Serena Williams Tennis
Get the latest updates on IPL 2021, IPL Points Table , IPL Schedule 2021 , live score . Like us on Facebook or follow us on Twitter for more sports updates. You can also download the NDTV Cricket app for Android or iOS.