The unseeded Portuguese beat Ferrer 6-2, 7-6 to clinch his first ever victory over a top five player. 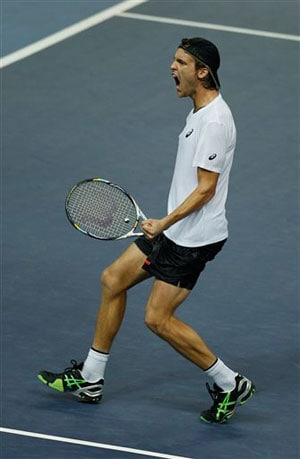 Unseeded Portuguese player Joao Sousa clinched his first ever victory over a top five player when he defeated top seed David Ferrer in the quarter-finals of the Malaysian Open on Friday.

Sousa, given special exemption from the organisers to skip the qualifying rounds after reaching the semi-finals in St. Petersburg last weekend, justified their faith in him by beating Ferrer 6-2, 7-6 (8/6) in 98 minutes.

The 24-year-old was denied a match point opportunity when he served for victory at 5-4 in the second set, before rallying from a 4-6 deficit in the tie-break.

"I've never beaten a top 10 player before, let alone someone in the top five. This without doubt is my biggest victory," said the 77th-ranked player.

A dejected Ferrer said he hopes to bounce back at next week's China Open.

"Obviously it's disappointing to have failed again in this tournament, but congratulations to Joao for his victory. He's such a solid player with a good forehand," said the world number four.

"I didn't play well in the first set. I made a lot of mistakes while in the second."

Ferrer, who was making his fourth appearance in this tournament, has never gone beyond the semi-finals in Kuala Lumpur.

He was knocked out in the first round in 2009 and reached the semis in 2010. He was also a quarter-finalist last year.

The result leaves Swiss world number 10 Stanislas Wawrinka as the favourite to lift the title after he edged out Dmitry Tursunov in a hard-fought 2-6, 6-3, 7-6 (7/3) win.

The 124-minute contest between Wawrinka and the sixth-seeded Russian was the longest in the tournament so far.

Melzer, 32, paid tribute to his younger brother Gerald, who gave him tips on an opponent he was meeting for the first time.

"Sure I called him and asked for his advice since he beat Delbonis before. I asked him for advice and whatever he said was true!

"So it looks like my little brother is tactically, a very wise player," joked Melzer after his 79-minute match.