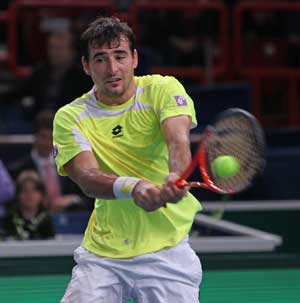 Ivan Dodig of Croatia ousted second-seeded countryman Marin Cilic 6-4, 6-2 in the second round of the BMW Open on Wednesday.

Dodig reached his third quarterfinals of the year at the expense of Cilic, who reached the final in 2010 and 2012.

Dodig, ranked 56th in the world, also defeated the Russian two-time champion Nikolay Davydenko in the first round.

The fourth-seeded Kohlschreiber, who also won the title in 2007, next plays Serbia's Viktor Troicki, who defeated Radek Stepanek of the Czech Republic 6-4, 6-4.

Fifth-seeded Alexandr Dolgopolov of Ukraine also progressed, but was pushed hard by Dmitry Tursunov of Russia before prevailing 7-6 (2), 7-6 (3).

Comments
Topics mentioned in this article
Tennis Ivan Dodig Marin Cilic
Get the latest updates on ICC T20 Worldcup 2022 and CWG 2022 check out the Schedule, Live Score and Medals Tally. Like us on Facebook or follow us on Twitter for more sports updates. You can also download the NDTV Cricket app for Android or iOS.