Nine-time champion Rafael Nadal advanced to the Italian Open final for the 12th time on Saturday with a 6-4, 6-4 win over American Reilly Opelka. 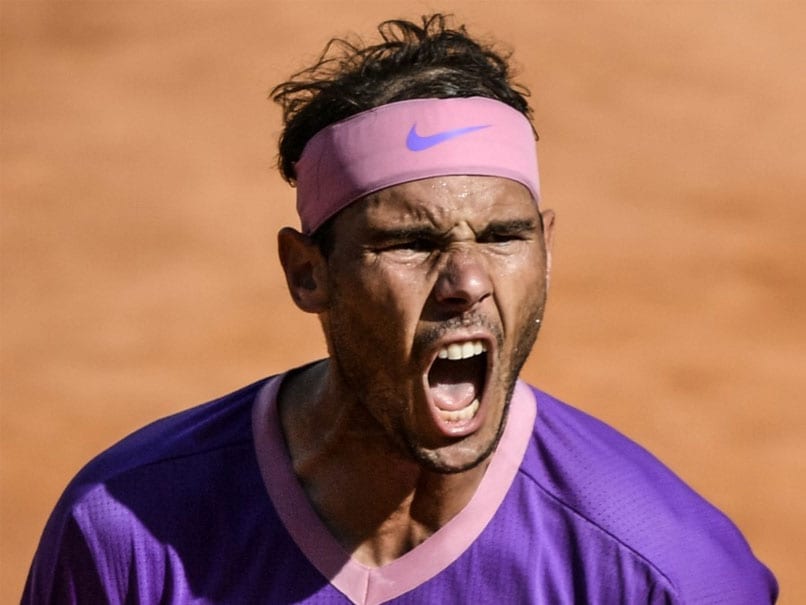 Rafael Nadal will face either Novak Djokovic or Lorenzo Sonego in the Italian Open final.© AFP

Nine-time champion Rafael Nadaladvanced to the Italian Open final for the 12th time on Saturday with a 6-4, 6-4 win over American Reilly Opelka. The Spaniard will play either defending champion Novak Djokovicor Italian Lorenzo Sonego in what will also be his 52nd Masters final. Playing his 500th clay-court match, Nadal staved off break points in the fourth game of the first set and did not look back to win through in 1hr 32min. "It's important for my confidence to be back in a final," said Nadal, who exited early in Monte Carlo and Madrid.

"I did what I had to do today, it was not an easy or beautiful match to play.

Two weeks before Roland Garros, Nadal had a tough run to the semi-finals, saving two match points in a 3hr 30min third round battle with Canadian Denis Shapovalov.

But the 34-year-old was rarely troubled by the towering American, who was playing his first Masters semi-final.

Nadal blasted down 11 aces and did not drop serve against a player who had not dropped a set all week.

A break in either set, Opelka's first dropped this week, put the second seed through to a possible fifth final meeting in Rome against five-time winner Djokovic.

Nadal is looking to equal Djokovic's record of 36 ATP Masters 1000 titles on Sunday.

He is also attempting to win 10 or more titles at a single event for the fourth time, after Roland Garros (13), Barcelona (12) and Monte Carlo (11).

Comments
Topics mentioned in this article
Rafael Nadal Tennis
Get the latest updates on ICC T20 Worldcup 2022 and CWG 2022 check out the Schedule, Live Score and Medals Tally. Like us on Facebook or follow us on Twitter for more sports updates. You can also download the NDTV Cricket app for Android or iOS.