Roger Federer extended his 2018 win streak to 13 matches and has only dropped three sets from 34 played this year. 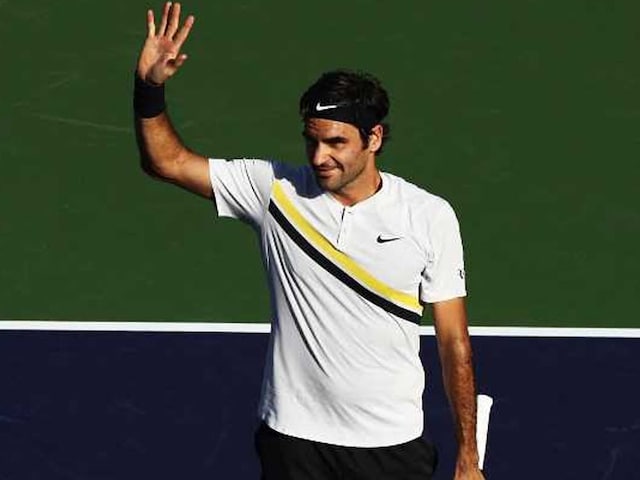 Roger Federer will face 25th-seed Filip Krajinovic in the third round.© AFP

World number one Roger Federer finished off Federico Delbonis in a rain-disrupted match on Sunday to reach the third round at Indian Wells as five-time champion Novak Djokovic was toppled. Federer returned to stadium court on Sunday afternoon and needed an hour to finish off his second round victory 6-3, 7-6 (8/6). "It's been a long time since I have been interrupted at night and have to come back the next day," Federer said. His title defence got off to a soggy start Saturday night when play was suspended because of rain showers with Federer up a set and tied 2-2 in the second.

The clouds rolled in just before the start of their match on Saturday and after a short delay to start the first set they managed to play until the skies blackened and the heavy rains came in the second. After another 90-minute delay organizers suspended play for the night.

Federer is making his 17th appearance in the California desert and is assured of remaining world number one if he makes it to the semi-finals.

He extended his 2018 win streak to 13 matches and has only dropped three sets from 34 played this year.

Federer hit five aces and won 74 percent of his first serve points in the match which took a total of one hour and 41 minutes over the two days.

Federer started quickly hammering a backhand winner to take the lone break of the first set and he would deny a pair of break chances when serving for the opener at 5-3.

In the tiebreaker, Federer took a 5-2 lead but Delbonis battled back to win a long rally and tie it 5-5.

Federer won the final three points to take the match by forcing Delbonis to dump all three of those shots into the net.

Federer will face 25th-seed Filip Krajinovic in the third round.

Federer and 10th seed Djokovic both came into the tournament seeking to become the first six-time winner of the event.

But Djokovic fell at the first hurdle with a shock loss to Japanese qualifier Taro Daniel.

It was another snag in the return for the world number 13 Djokovic who admitted he lacked composure while playing in just his second event of 2018 and first since having surgery.

"For me it felt like first match I ever played on the tour. Very weird," Djokovic said. "I mean, I just completely lost rhythm, everything.

"Just struggled also a little bit with the health the last couple of weeks."

The Serb is making a cautious return to the ATP Tour after stopping his 2017 season following Wimbledon, due to a right elbow injury. He lost to Chung Hyeon in the Australian Open fourth round in January before undergoing the surgery.

Djokovic scrambled to win the second set on Sunday but the rust from the layoff was evident as he made 62 unforced errors compared to 29 for Daniel.

Federer said he understands well how even a champion like Djokovic could be struggling to find his game so soon after having surgery.

"To me, it's not that surprising," Federer said. "When you go away from the game for over a two-month period it starts feeling a little bit that way.

"When you do come back from injury or when you haven't played in a long time, it just takes extra effort.

"It is still early stages for Novak coming back and the first one after surgery. He's only going to get better from here."

Comments
Topics mentioned in this article
Roger Federer Novak Djokovic Tennis
Get the latest Cricket news, check out the India cricket schedule, Cricket live score . Like us on Facebook or follow us on Twitter for more sports updates. You can also download the NDTV Cricket app for Android or iOS.