Monaco needed just 56 minutes to dispatch American qualifier Ginepri in their first contest in five years. Isner booked his spot with a 6-3, 3-6, 6-3 win over Ricardas Berankis earlier in the day. 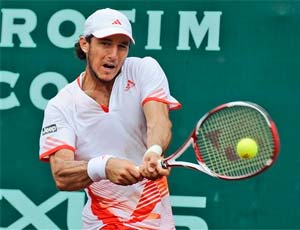 Defending champ Juan Monaco crushed Robby Ginepri 6-1, 6-0 in the quarter-finals on Friday of the US Clay Court Championships, setting up a re-match of last year's final with John Isner.

Only this time Monaco and runner-up Isner will meet in the Houston semi-finals after Isner booked his spot with a 6-3, 3-6, 6-3 win over Ricardas Berankis earlier in the day.

The third-seeded Monaco, of Argentina, needed just 56 minutes to dispatch American qualifier Ginepri in their first contest in five years. Monaco did not face a break point and broke Ginepri five times on the clay court at the River Oaks Country Club.

"From the beginning, I had a good feeling," Monaco said. "I was serving well.

"Every game I got more confident. I played very well. Maybe Robby didn't have a good day. I have great memories on this court."

Monaco said he hopes to carry the momentum over from Friday's win to the semis.

"John is a great player. I'll have to play like today or even better tomorrow if I want to beat him. I have to be focussed. When I get the opportunity, I can't miss it."

Almagro, who has won all 12 of his ATP Tour titles on clay, rolled over the Italian 6-4, 6-4 in their centre court match.

The 27-year-old Spaniard Almagro blasted nine aces, had one double fault and won 75 percent of his first-serve points.

Almagro next faces American wild card Williams, who reached his first-ever ATP semi-final by outlasting Spain's Ruben Ramirez Hidalgo 7-6 (7/1), 1-6, 6-4 in just under two and a half hours.

The 22-year-old Williams finished with five aces and won 58 percent of his second-serve points compared to just 39 per cent for the Spaniard.

The fifth-seeded Isner blasted 19 aces and won 89 per cent of his first serve points to advance past the Lithuania's Berankis, who beat second seed Tommy Haas in the previous round.

Comments
Topics mentioned in this article
Tennis Tommy Haas Juan Monaco John Isner Ricardas Berankis
Get the latest Cricket news, check out the India cricket schedule, Cricket live score . Like us on Facebook or follow us on Twitter for more sports updates. You can also download the NDTV Cricket app for Android or iOS.