French Open: Dominic Thiem Blows Two-Set Lead Against Pablo Andujar To Go Out In First Round 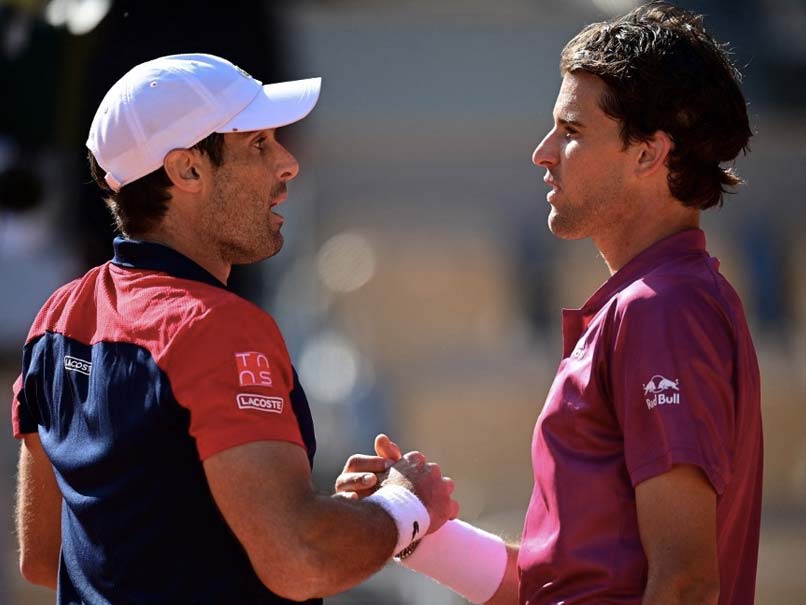 It is Thiem's first opening-round exit at Roland Garros and the first time he has failed to reach at least the quarter-finals of the tournament since 2015.

"It does feel very tough, as I was used since 2016 to play very deep in this tournament," said the 27-year-old.

"But at the same time, the last first-round exit in a Grand Slam, US Open 2019, is not that long ago.

"So (I) was not like the big three who are never losing before the quarters. I mean, I had early losses before, but especially here where since 2015 I didn't have them, it feels weird and it feels very difficult."

It is the first time in his 17-year career that Andujar has come from two sets behind to win.

"It's a very special moment because I'm 35 and I don't know how long I'm going to play," said Andujar. "I had to believe to be able to get this result."

Austrian Thiem lost both the 2018 and 2019 French Open finals to 13-time champion Rafael Nadal, but did win his maiden Grand Slam title last year at the US Open.

His form had been patchy this season, though, having lost to Lorenzo Sonego in Rome and Cameron Norrie in Lyon over the past two weeks.

"Lyon and here, the shots and all how I moved and everything was just not the real me, I would say, or my version who is able to play for big titles," admitted Thiem. "It's just not good enough at the moment."

He seemed to be in total control when clinching the second set, before also missing a break point in the third game of the third set.

Thiem also wasted an opportunity to take a 3-1 lead in the decider and ended the match having taken just six of 19 break points.

"Losing after being two sets to zero up, it's very strange to me, and, I mean, I have to analyse it and think about what's wrong at the moment," he added.

"And then of course try to hit back as soon as possible."

Andujar, the world number 68, had not beaten a top-10 player since 2015 until a win over Roger Federer in Geneva last week.

"Probably that win helped today," he said. "I didn't think I was in my best shape, but the belief was the key to the win today."

Andujar will face either Argentina's Federico Delbonis or Moldovan Radu Albot in the second round.

It will be an especially bitter blow for Thiem, though, after he had been placed in the opposite half of the draw to Nadal, world number one Novak Djokovic and Federer.

Comments
Topics mentioned in this article
Dominic Thiem Pablo Andujar Tennis
Get the latest updates on SA vs IND 2021-22, check out the Schedule and Live Score . Like us on Facebook or follow us on Twitter for more sports updates. You can also download the NDTV Cricket app for Android or iOS.