Fitness Scare For Garbine Muguruza As Brisbane Proves Too Hot

World number two Garbine Muguruza suffered a fitness scare ahead of this month's Australian Open when she was forced to retire from the Brisbane International with severe cramping. 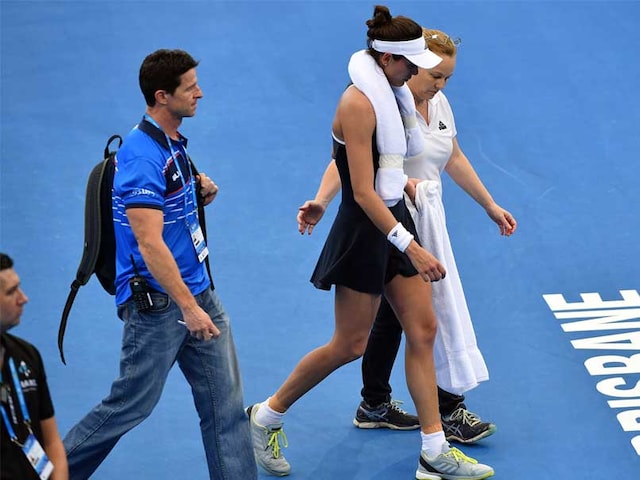 Garbine Muguruza walks off after sustaining an injury at Brisbane International.© AFP

World number two Garbine Muguruza suffered a fitness scare ahead of this month's Australian Open when she was forced to retire from the Brisbane International on Tuesday with severe cramping. Wimbledon champion Muguruza was ahead 2-1 in the deciding set against Serbia's Aleksandra Krunic in the second round of the warm-up tournament for the season's first Grand Slam event when she collapsed to the ground following a serve. The Spanish top seed was unable to continue and handed the match to Krunic 5-7, 7-6 (7/3), 2-1.

"I felt in trouble in the second set when I was 2-0 up," Muguruza said.

"I started to feel my calves were cramping."

Muguruza had won a tight first set and appeared heading for a straight-set win over Krunic when she opened up a 5-2 lead in the second.

However, she began to struggle in the 30 Celsius (86 Fahrenheit) heat and oppressive humidity as Krunic fought back to win the second set in a tiebreak.

Muguruza received treatment from the physio on the court before the start of the decider and broke Krunic only to collapse while serving to consolidate the service break.

"I continued to think that with the match they might go away, and then they were increasing, increasing. And then I had a lot of my body cramping," Muguruza said.

The loss ends any hope Muguruza had of leapfrogging Simona Halep and becoming world number one before the seedings are decided for Australian Open, which begins on January 15.

But Muguruza was not too downhearted by having to withdraw.

"I'm pleased because we were playing very good points and, you know, good rallies," she said.

"I felt it was a good level, a good match, but I wanted to finish to see, to evaluate how the match was, but I'm happy with the way I was playing."

Krunic will now play either Sorana Cirstea or Anastasija Sevastova in the quarter-finals.

Cornet, who won her first round match when fourth seed Caroline Garcia retired injured, was too consistent for Lucic-Baroni, winning 6-1, 7-5.

Comments
Topics mentioned in this article
Garbine Muguruza Tennis
Get the latest Cricket news, check out the India cricket schedule, Cricket live score . Like us on Facebook or follow us on Twitter for more sports updates. You can also download the NDTV Cricket app for Android or iOS.