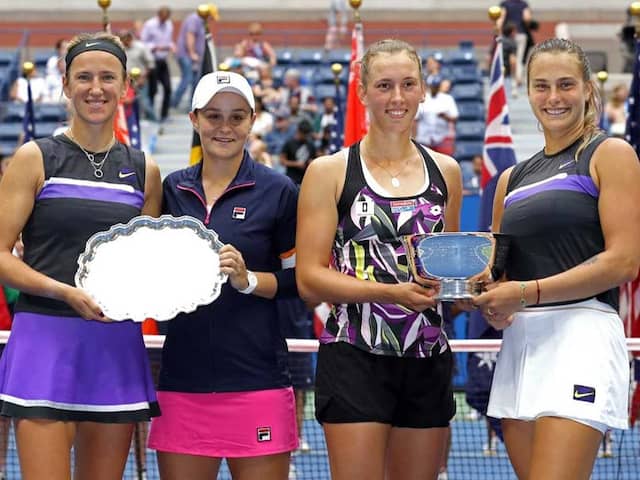 Belgium's Elise Mertens and Belarusian Aryna Sabalenka captured their first Grand Slam title Sunday by winning the US Open women's doubles final over Australia's Ashleigh Barty and Belarus' Victoria Azarenka 7-5, 7-5. The fourth-seeded duo dropped only one set in the tournament in reaching their first Grand Slam final. "I can't believe we won a Grand Slam," Mertens said. "It's all so new. Thanks to Aryna. I keep her going. She keeps me going."

Sabalenka's overhead smash produced a break to win the first set and it was an Azarenka overhead smash beyond the baseline that ended matters after 97 minutes.

"It's like something unbelievable this year happened, especially in doubles," Sabalenka said. "I've enjoyed every second on the court."

Mertens and Sabalenka won the only prior meeting between the duos on the way to capturing the Miami title.

Barty, who takes over Monday as world number one in singles, won last year's US Open title with American CoCo Vandeweghe.

The Aussie could have become the first woman with back-to-back US Open women's doubles titles since France's Nathalie Dechy in 2006 and 2007.

"The level was high and we were right there," Barty said. "But they were huge on the big points and that's why they won the title."

Comments
Topics mentioned in this article
Ashleigh Barty Tennis
Get the latest Cricket news, check out the India cricket schedule, Cricket live score . Like us on Facebook or follow us on Twitter for more sports updates. You can also download the NDTV Cricket app for Android or iOS.