Australia's Jelena Dokic on Sunday came from behind to down Lucie Safarova of the Czech Republic in a thrilling three-set battle to capture the Malaysian Open title. 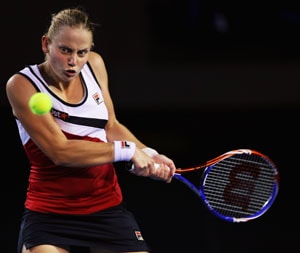 Australia's Jelena Dokic on Sunday came from behind to down Lucie Safarova of the Czech Republic in a thrilling three-set battle to capture the Malaysian Open title.

Despite being ranked a lowly 91 in the world, the 27-year-old Australian was in tremendous form, hitting a series of accurate baseline shots to overcome the left-handed Czech player in two hours and 40 minutes.

There were long and exciting rallies on court, with Safarova fighting back with strong returns and powerful aces, but a calm Dokic managed to unnerve the 24-year-old fifth seed into making unforced errors.

"I played for one point at a time. She (Safarova) made some unforced mistakes and I really exploited on it," the Australian told reporters.

"I am happy to be in the WTA final. It is a fantastic to win the title and the players I beat."

Dokic was ranked as high as number 4 in the world back in 2002, but dropped out of the top 100 in 2006 as she struggled to cope with family-related problems.

The Kuala Lumpur tournament has proved to be a milestone for Dokic, who started her run to the title by beating world number 5 Francesca Schiavone of Italy in the first round.

It was her first win over a top-five player since 2003, when she defeated the then number 1 Kim Clijsters in a tournament in Zurich.

Dokic's career highlights include reaching the semi-finals at Wimbledon and the Sydney Olympics in 2000, and the quarter-finals of the French Open (2002) and Australian Open (2009).

Before competing in Malaysia, she took part in the Qatar Open, where she was bundled out by compatriot Jarmila Groth in the second round.

But the former world number 1 Safina and her partner Voskoboeva needed a super tiebreaker to win the final 7-5, 2-6, 10-5.

The Russian/Kazakh pair kept their cool and fired a series of accurate baseline shots to win after losing the second set, sealing victory when Voskoboeva served a brilliant ace.

"We were both very motivated. We were very much relaxed and did not have much pressure," Voskoboeva told reporters.

Comments
Topics mentioned in this article
Tennis Lucie Safarova Petra Martic Marion Bartoli Mathilde Johansson Jelena Dokic Badminton
Get the latest updates on ICC T20 Worldcup 2022 and CWG 2022 check out the Schedule, Live Score and Medals Tally. Like us on Facebook or follow us on Twitter for more sports updates. You can also download the NDTV Cricket app for Android or iOS.