Unstoppable Novak Djokovic won his 19th straight match this season as he crushed Denis Istomin of Uzbekistan 6-0, 6-1 on Friday to make a dominant start at the $9 million Miami WTA and ATP Masters. 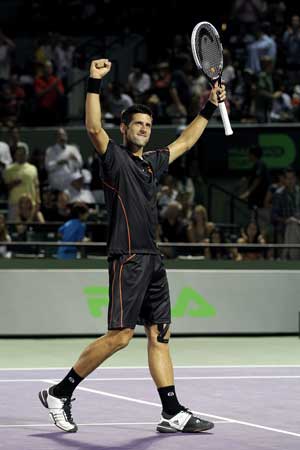 Unstoppable Novak Djokovic won his 19th straight match this season as he crushed Denis Istomin of Uzbekistan 6-0, 6-1 on Friday to make a dominant start at the $9 million Miami WTA and ATP Masters.

In a match played after some of tennis' top players personally collected donations from the crowd at Crandon Park in aid of disaster-stricken Japan, Djokovic produced another emphatic victory.

It was his third triumph by the same score in his last seven matches.

"I'm having the best couple of months of my career," said Djokovic, winner of three events this season. "I'm playing really well and I showed it again."

"I'm feeling really well on the court, and emotionally very stable. I have more self-belief that I can play good tennis and that I can win against any player on the tour."

By contrast, it was a day of utter frustration for Andy Murray as the Scot crashed out to unheralded American Alex Bogomolov 6-1, 7-5.

Murray's loss in 95 minutes to the qualifier ranked 118th was the second straight unexpected defeat for the fifth seed, who frankly admits that he is struggling with his game and doesn't have an immediate answer.

"A lot of players would get frustrated if they were playing the way that I have the last two weeks," said Murray, who lost to Djokovic in the Australian Open final in January.

"I know for sure if any of the guys ahead of me in the rankings were playing like me they would be disappointed as well."

Murray has not won a set since his Australian Open semi-final on January 28, when he beat David Ferrer.

He was beaten in his opening matches in Rotterdam and Indian Wells, his defeat in the California desert coming at the hands of another American, Donald Young, also ranked outside the top 100.

"I've played poorly the last two weeks, but I was happier with the way that I competed this week than last. Confidence could have something to do with that," Murray said.

Murray was broken seven times, only managing three breaks of the Moscow-born Bolgomolov.

Bolgomolov took a 5-3 lead in the second, dropped his serve but then broke to have the final word in the last game with a drop shot winner.

In other men's matches, fourth seed Robin Soderling fought back to post a 3-6, 6-2, 6-4 victory over Croatian Ivan Dodig and reach the third round.

Two-time Roland Garros finalist Soderling was playing for the first time in almost two weeks, since losing his first match at Indian Wells after trying to play with an ankle problem and after five days in bed with a virus.

"The first round is always very difficult," said the relieved Swede. "Obviously I didn't play my best tennis today, but I'm still very happy that I won. I know I can wake up tomorrow feeling great."

With three titles already this season, the Indian Wells loss was a blip on Soderling's record in 2011. He has now won a leading 20 matches on the ATP.

"At Indian Wells I didn't play the way I wanted to, but I had some problems when I got there. I was in bed with fever and I didn't have too many days to prepare."

On the women's side, second seed Kim Clijsters took to the court after a shoulder injury which forced her to quit her last match in the fourth round of Indian Wells, starting in Miami with a 6-1, 6-1 thrashing of Anastasia Yakimova.

"It's not fully healed, but it's healing," Clijsters said of her shoulder. "To me, that's the biggest relief at the moment. After Indian Wells I was pretty worried.

"Now I feel that I'm almost able to do everything that I want out there."