Doubles duo Lucie Hradecka and Kveta Peschke sealed a 3-2 victory for the Czech Republic in the Fed Cup final against Russia here on Sunday. 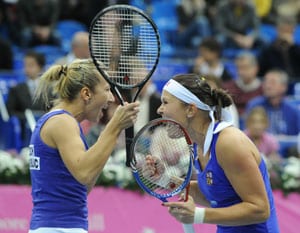 Doubles duo Lucie Hradecka and Kveta Peschke sealed a 3-2 victory for the Czech Republic in the Fed Cup final against Russia here on Sunday.

The pair needed four match points to see off Maria Kirilenko and Elena Vesnina 6-4, 6-2 after 1hr 36min in the Olympic Stadium as the visitors lifted their first title since 1988, when the former Czechoslovakia won the annual women's team competition.

"I'm happy we managed to get the third one. We won it all together because the victory is made of small pieces you have to put together. It was great team work."

"The Czechs won thanks to Kvitova's superb play," Tarpischev said. "She was just great."

The Russian doubles pair had started confidently breaking Hradecka's serve halfway into the first set only for the visitors to hit back taking Kirilenko and Vernina's serves and the opening set in 49 minutes.

In the second set Hradecka and Peschke raced to a 4-1 advantage before clinching the deciding point with another break in the eighth game.

Anastasia Pavlyuchenkova then took the tie to the decisive doubles by ousting Lucie Safarova 6-2, 6-4.

"The Czechs played unbelievably well, they dominated the game and gave us no chance," Vesnina said. "It was tough to create something today but we fought till the very end."

Pavlyuchenkova, ranked 15th, broke her rival's serve twice in the opening set for a one-set advantage after 41 minutes, and a break in the fifth game of the second set put her on the way to victory.

"I was nervous playing as I had no room for error," said Pavlyuchenkova, 20, who took 90 minutes to record her fourth win over Safarova in five meetings.

"But she (Safarova) also was in the same situation and it was also tough for her. Anyway, all's well that ends well."

Kvitova, fresh from her success at last week's season-ending WTA championship in Istanbul, battled back from a set down to win her first ever meeting with the 26-year-old Kuznetsova in 2hr 13min.

"I wasn't playing my tennis in the first set, (I was) making too many mistakes, while Svetlana moved and returned very well," said Kvitova.

"It was tough to come back into the match in the second set but I forced myself into playing with crosses mainly instead of my favourite flat drives."

Kuznetsova admitted: "The difference between us today was that she has played so many tight matches this season, while I rarely had such intriguing matches.

"I played well today but she was just a bit better at key moments."

On Saturday, Kvitova drew first blood for the Czechs, beating Kirilenko 6-2, 6-2, while Kuznetsova pulled the scores level with a 6-2, 6-3 win over Safarova.