Controversial Americans Wayne Odesnik and Donald Young moved into the spotlight Monday at the ATP Washington Classic as World No. 8 Mardy Fish joined No. 12 Andy Roddick in withdrawing due to injury. 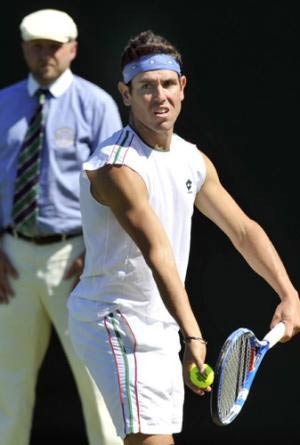 Controversial Americans Wayne Odesnik and Donald Young moved into the spotlight Monday at the ATP Washington Classic as World No. 8 Mardy Fish joined No. 12 Andy Roddick in withdrawing due to injury.

Former World No. 4 James Blake advanced past Japan's Tatsuma Ito 6-3, 6-3 in 56 minutes in the feature match at the $1.4 million hardcourt event, which will be Odesnik's first ATP appearance since a doping ban imposed in May of 2010.

Young, who beat New Zealand qualifier Artem Sitak 6-0, 6-3, issued a profane tirade on Twitter last April against the US Tennis Association after feeling slighted for a French Open wild card. Young apologized and no longer tweets.

"I'm kind of missing it a little bit," Young said of the popular micro-blogging website. "People say 'Have you seen that?' But I will definitely stay away from it."

US No. 1 Fish, a winner two weeks ago in Atlanta, withdrew a day after suffering an bruised right heel in an ATP final loss at Los Angeles. Roddick had pulled out last week with an abdominal muscle strain.

The departure by Fish, who would have been the second seed behind Frenchman Gael Monfils, opened a spot in the field for a lucky loser who turned out to be the disgraced Odesnik, a 25-year-old South African-born American left-hander.

Odesnik was banned for two years last May after pleading guilty to importing human growth hormone (HGH) into Australia. He lost all ranking points after reaching a career-high 77th and his ban was backdated to the prior December.

Odesnik, arrested in January of last year in Brisbane with eight vials of HGH, pleaded guilty to bringing the banned performance-enhancing substance into Australia but denied taking HGH. He has never tested positive for the drug.

The International Tennis Federation cut Odesnik's ban to one year after he cooperated with the group's anti-doping program and last January he began rebuilding his ranking in low-level events to now stand 161st in the world.

"I was fighting, grinding as hard as I could," Stepanek said. "I made sure to step it up in the second set.

Blake, the 2002 Washington winner, advanced to a Tuesday second-round match against Argentina's David Nalbandian, the defending champion and eighth seed who was among 16 players to receive opening-round byes.

Blake, who has battled back to 90th in the rankings, won his most recent of 10 titles at New Haven in 2007 but still feels the competitive fires at age 31.

"It's still a ton of fun," Blake said. "I just prepare the best I can and let the rankings sort themselves out. It would drive you crazy looking at the rankings. It would be like watching the stock market every five minutes."

Comments
Topics mentioned in this article
Tennis Andy Roddick Robert Kendrick Mardy Fish Donald Young Wayne Odesnik
Get the latest updates on IPL 2020, check out the IPL Schedule for 2020 and Indian Premier League (IPL) Cricket live score . Like us on Facebook or follow us on Twitter for more sports updates. You can also download the NDTV Cricket app for Android or iOS.