Daniil Medvedev took quick revenge on Friday for his Olympic loss to Pablo Carreno Busta, with the top seed at Cincinnati Masters winning 6-1, 6-1. 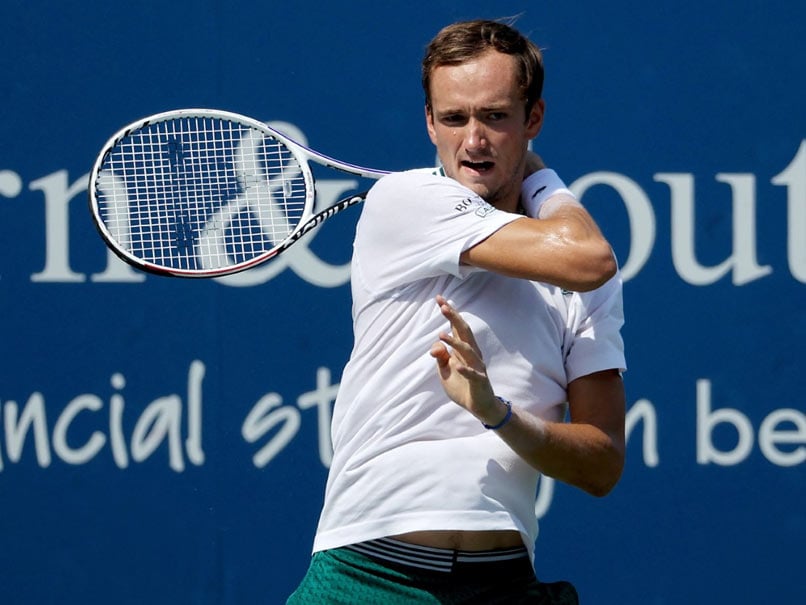 Daniil Medevev will next face Russian compatriot Andrey Rublev in the semis.© AFP

Daniil Medvedev took quick revenge on Friday for his Olympic loss to Pablo Carreno Busta, with the top seed at the ATP and WTA Cincinnati Masters delivering a crushing 6-1, 6-1 verdict. The Russian world number two had it all his way into the semi-finals with a 56-minute rout, which ended on the Spaniard's double-fault. "I was feeling great during the match. In these conditions you try to win the match as fast as possible, especially against Carreno Busta, who can catch fire at any moment and start getting you into long rallies," Medvedev said. "I tried to keep pushing him and I am really happy I managed to do it."

Women's top seed Ashleigh Barty recovered from being down a break in the second set to sweep past fellow French Open champion Barbora Krejcikova 6-2, 6-4.

The Australian handed her Czech opponent only a third loss since mid-May.

Krejcikova won Roland Garros in June while Barty claimed the Paris title in 2019 and Wimbledon this season.

"I feel like I did a good job looking after my own serves," Barty said. "For all but one service game, I felt like a lot of the time I was in control.

"It was just staying patient, knowing that I was doing the right things."

Medvedev, last week's Toronto champion, won his eighth match in a row as he prepares for a final four contest against compatriot Andrey Rublev.

Sefanos Tsitsipas, the second seed, had to lift after Felix Auger-Aliassime saved two match points late in the second set.

"Things got tough in the second set and I had to find different solutions. I stepped in with aggression in the third," he said.

"It took a lot of patience to find my opportunities in the third set. But I was determined and I didn't let go."

Norway's Casper Ruud, a wizard on clay this summer with three titles in three weeks, was taken apart by Olympic gold medalist Alexander Zverev 6-1, 6-3 as the top four men's seeds took their places in the semis.

Medvedev has won all four tour matches against Rublev, including the quarters here in 2019 when Medvedev went on to win the title.

"I'm happy to play against him, because it's a nice challenge for me to see what I need to improve," Rublev said.

"Everything went right, I felt good from the beginning," Teichmann said. "I served well, defended well, it all worked out."

The Swiss will play for the final against Karolina Pliskova, who put out Paula Badosa when the Spaniard retired trailing 7-5, 2-0 with a right shoulder injury.

Comments
Topics mentioned in this article
Tennis Daniil Medvedev Pablo Carreno Busta Ashleigh Barty Barbora Krejcikova
Get the latest updates on ICC T20 Worldcup 2022, check out the Schedule and Live Score. Like us on Facebook or follow us on Twitter for more sports updates. You can also download the NDTV Cricket app for Android or iOS.