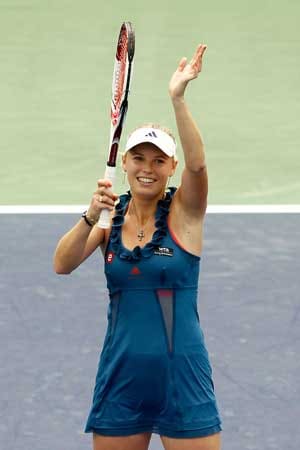 Denmark's Wozniacki captured her second title of 2011 and becomes the eighth different women's champion in eight years at the $4.5 million WTA hardcourt tournament.

"It's a huge tournament, so I'm very pleased about the way I have been playing this week and my result today," Wozniacki said.

"Once again I showed that I can play great tennis and I've beaten some really good players this week."

Wozniacki broke Bartoli's serve three times in the final set and clinched the victory on the second match point when the Frenchwoman hit a two-handed backhand long.

The 20-year-old Wozniacki has been playing some of the best tennis of her career the past few months, having taken two of her past three tournaments after winning last month in Dubai. She also reached the final in Doha.

The victory was one of the biggest in Wozniacki's career. She picked up $605,500 in first-place prize money Sunday after finishing runner-up in Indian Wells last year to Serbia's Jelena Jankovic. Bartoli took $298,000.

Wozniacki said the tournament trophy will look nice in her home but she joked she is not sure how she is going to get it there.

"It's so heavy. I think it's very beautiful," she said. "I just hope that they will ship it home to me, because to have it in my luggage will be just extra kilos and extra overweight. I already have too much."

Wozniacki paid tribute to Bartoli on the court immediately after the match.

"Marion, you had an amazing tournament," Wozniacki said. "I am sorry I had to beat you in the final. It is not like football where you can have a draw."

At 26 years and five months old, Bartoli was seeking to become the oldest winner since Steffi Graf in 1996. Bartoli is the first Frenchwoman to reach the Indian Wells final.

A tearful Bartoli thanked her coach and father, Walter, who watched the match by himself in the players box. By contrast, Wozniacki's players box was full as she had a number of family and friends viewing the match.

"Sorry I am a bit in tears but tears of tiredness," Bartoli told the crowd at center court. "You make me cry today.

Bartoli, whose previous best showing at Indian Wells was reaching the fourth round, paid tribute to the champion.

"I would like to congratulate (Caroline). You can be proud of yourself. I know your big goal is to get a Grand Slam (title) and I am sure you will get it soon."

She told reporters later, "I really take a lot of positives out of this match.

"When we played in Doha a couple weeks ago it was an easy win for Caroline, and today I think it was a lot tougher.

"I'm just gonna look on a positive and try to build from it."

Comments
Topics mentioned in this article
Tennis Caroline Wozniacki Marion Bartoli
Get the latest updates on ICC T20 Worldcup 2022 and CWG 2022 check out the Schedule, Live Score and Medals Tally. Like us on Facebook or follow us on Twitter for more sports updates. You can also download the NDTV Cricket app for Android or iOS.