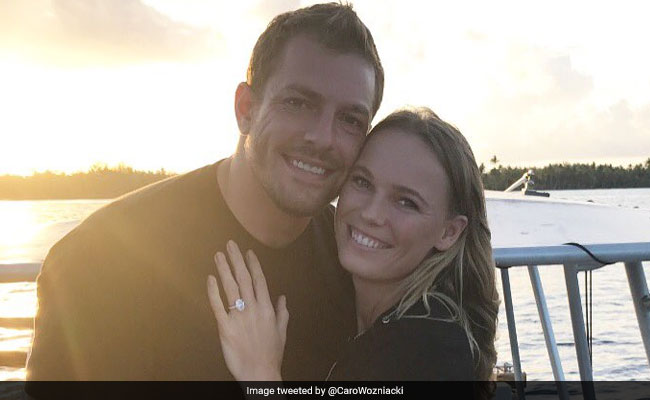 Days after clinching her maiden WTA Finals title, Danish tennis ace Caroline Wozniacki has another reason to be happy about. Wozniacki took to Twitter to announce her engagement to NBA star beau David Lee on Saturday morning. The 27-year-old posted a message alongside a picture of her diamond engagement ring on her official Twitter account. “Happiest day of my life yesterday saying yes to my soulmate @Dlee042”, she captioned the post.

Happiest day of my life yesterday saying yes to my soulmate @Dlee042 pic.twitter.com/TwDPJjoabA

"YES! So thrilled to be engaged to my soulmate," replied David.

She said yes!!! So thrilled to be engaged to my soulmate!!! pic.twitter.com/8Xltz5GeJc

Wozniacki won the WTA Finals title by defeating Venus Williams 6-4, 6-4. She remains one of the few tennis players in history to have topped the WTA rankings without winning a single Grand Slam in her career. Wozniacki is currently ranked number 3 in the world.

Wozniacki was earlier engaged to Irish golferRory McIlroy before they broke up in 2014, days after their wedding invitations were sent out.

Lee, who played for the San Antonio Spurs last season, is a 12-year NBA veteran but is currently a free agent. He has also played for the Dallas Mavericks, Boston Celtics, Golden State Warriors and New York Knicks during his career.

Comments
Topics mentioned in this article
Caroline Wozniacki Tennis
Get the latest updates on ICC T20 Worldcup 2022 and CWG 2022 check out the Schedule, Live Score and Medals Tally. Like us on Facebook or follow us on Twitter for more sports updates. You can also download the NDTV Cricket app for Android or iOS.